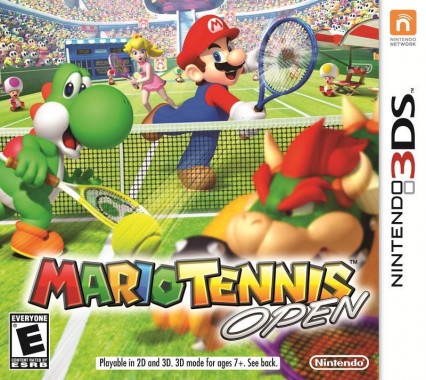 Those who were awaiting the next big 3DS release can now celebrate, as Nintendo have launched Mario Tennis Open for the 3DS. Yeah, this is pretty much the Mario Tennis we all know and love, but a good number of extra features have been included this time around to season the franchise with some new flavor. This time around, players can customize their own Mii character in gear that can be unlocked, which boosts stats depending on what you equip.

There is an online mode as well, which will allow anyone with wireless internet to go up against a friend or rival via the 3DS’ Wi-Fi support, which is yet another new feature for the series. Special games also look to add in a bit of replay value to the package, delivering little romps such as Super Mario Tennis, where you get to go into the original Mario world and use your racket to knock off oncoming enemies. There is quite a bit of content in this portable offering, and this may very well be the most ambitious Mario Tennis title to date. The wait is over though, so all of you Mario Tennis fanatics can go snag a copy at any retailer under the sun as of today.