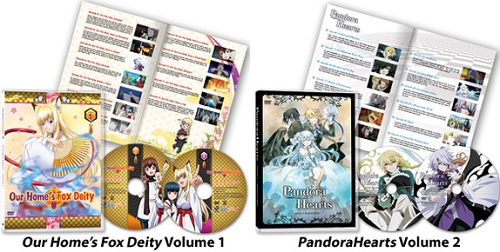 Whenever NIS America releases a new anime, their standard practice is to release a premium edition version which, although it comes with a number of special bonuses such as a collectible art case, a fancy fully colored art book as well as the standard 2 disc package. However one of the drawbacks from the premium edition is that they usually cost around $69.99 for the premium edition, usually containing only 12 or 13 episodes.

However the more frugal and long waiting anime fan can now take advantage of NIS America’s new line of standard edition releases. A number of anime that they have released over the past year will be getting a standard edition release on January 24th. This includes Volumes 1 and 2 of Pandora Hearts, PERSONA -trinity soul- and Our Home’s Fox Deity. These volumes will run from $39.99 to $44.99 which is a decent discount for anime lovers. The standard editions will come in one DVD case with your standard box art and a few on-disc special features, so special feature lovers won’t miss out on everything. To pick up or pre-order these standard editions you can do so at NIS America’s online store.