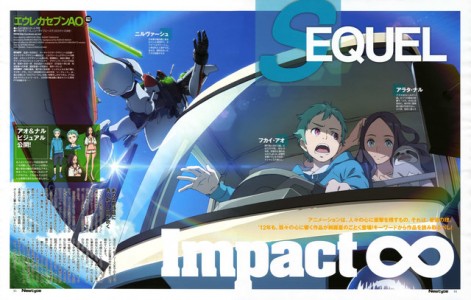 Some new information has come to light regarding the upcoming sequel to the cult classic mecha anime Eureka Seven. The sequel, Eureka Seven: AO, now has it’s plot detailed as well as some new character artwork for protagonists, Ao and Naru.

The plot focuses on 13 year old Ao Fukai, lives with an elderly doctor as his parents disappeared when he was at a young age. His childhood friend Naru Arata has a strange ‘yuta’ ability that she got when she was younger due to a mysterious accident. The ‘yuta’ ability seems to allow her to speak with the dead. Soon Ao discovers the Nirvash mecha and the story takes flight from there.

Some character artwork of Ao and Naru can be seen below. Eureka Seven: AO is set to premiere in the Spring 2012 anime season.