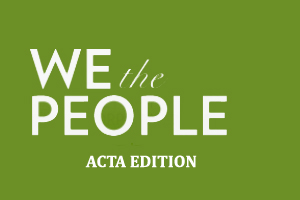 Wait, wait, didn’t we JUST defeat an awful bill that promised to destroy the Internet?  Apparently though, heroes and justice lovers NEVER get a break.  After all the hubbub over SOPA and PIPA in the USA and the world, it was assumed that the world was safe… for the moment.  But lurking beneath the surface of some befuddled politician’s brain came a new horror: ACTA. This legislation secretly entered negotiations between the US, Canada, Japan, the European Union, South Korea, Mexico, Switzerland, Australia and New Zealand and would do much more damage than SOPA and PIPA ever could.  After all, this bill would not even have to pass through a legislative party vote.  It would  simply be an international agreement, with no input from you.  So go, GO NOW, to your phone or computer and urge your country to stop ACTA. If your in the USA, you can sign this White House petition here, right now.