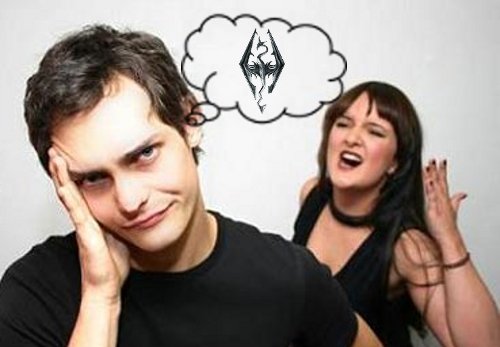 Are you a gamer that is lucky enough to enjoy the comfort of a significant-other? If so, then you have obviously been cheating on him/her by playing Skyrim. You may have noticed the irritation with you lately, and that is because more time has been spent slaying dragons than paying attention to his/her needs. I have surveyed a few people to gather their opinions on the very subject of Skyrim. The following may not represent every relationship, but the responses I received are very real.

1. I hate competing for his attention. I am a girlfriend and that is a game!

2. Don’t tell me you got married on the game. That will piss me off.

3. I have to act happy whenever he achieves a new spell.

4. You remember the last “quest” you’re on, but you can’t remember our last conversation.

5. Now, we have to plan events and evenings around Skyrim playing.

6. His homework, hygiene, and eating have been put aside. 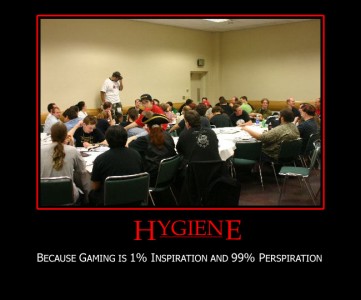 7. Whenever there is a fellow Skyrim player in the near vicinity, I no longer exist.

8. I don’t know how to politely tell him “no” when he asks me to play.

9. I have to show skin to get his attention.

10. If Skyrim never ends, I have no hope of getting him back. 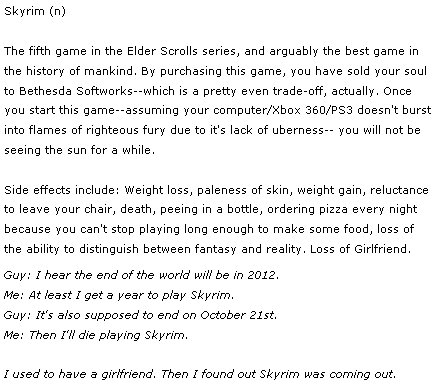 Addictive games like Skyrim require some sort of immersion to get the most fulfillment; however, I believe that video games should be enjoyed in moderation while completing daily responsibilities as well as maintaining social relationships – outside of Skyrim. If you have a significant-other that has expressed some of these responses, take a break and reassess your priorities.

If by any chance you have found a significant-other that plays Skyrim, you have unlocked the last achievement. Congratulations!

Hunted: The Demon’s Forge is at war with monsters