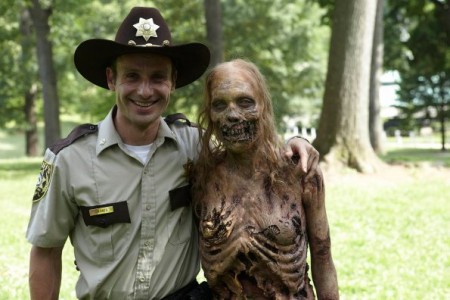 The Walking Dead, is a series that takes it’s title seriously. Not only is it one of the slowest paced Zombie shows ever created, but it is also one that lacks the focus it strongly needs to ever be more than just ‘good’.

The first season featured a total of 6 episodes, so it is needless to say that it had no excuse for taking things slowly. However it did take things very slowly, with a self-assured swagger even. It’s self-assurance was ultimately earned by unprecedented ratings. But for viewers looking for a cohesive story told in a reasonable amount of time, some couldn’t help but be left with a bad taste in their mouths following the conclusion to the first season of the series.

That brought us to the second season The Walking Dead which begun back in October this year, has been spinning it’s wheels for 7 episodes now, with a story-line that was actually not part of the original source material. While episode 7 does send us into hiatus with that story-line concluded, it was certainly hell on earth, watching episode after episode of nothing note worthy happening.

Some may say this is The Walking Dead building up to the big reveal, I call it stalling. It is evident to me that the people working on the series have spent the past few episodes trying to pad out the season with what amounts to nothing more than filler. Thankfully the mid-season finale ended in a way that atleast gives me hope that things we get back on track soon.

What The Walking Dead needs to do more than anything is to refocus on the story it is trying to tell and find a pacing that works for this series, because the current pacing just does not work for the type of story it tells. We need things to actually happen. Not waste 3 episodes until something substantial takes place.

I have faith in this series and know that if it looks long and hard at itself, it can reevaluate its direction and create something truly brilliant. So I emplore you Walking Dead, become the Running Dead when you make your return, you will be a better series for it.