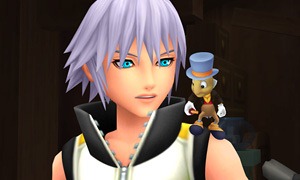 It looks like the cricket from Pinocchio is getting an expanded role in Kingdom Hearts: Dream Drop Distance. Jiminy Cricket will be a companion of Riku, if the above screenshot is anything to go by. Riku will encounter him in a world entitled Prankster’s Paradise. This happens to be the homeworld of Pinocchio and possibly other characters from the Disney animated movie. It is unknown what purpose Jiminy will serve if he does not retain his role of official journey writer.

Kingdom Hearts: Dream Drop Distance will also use the Deck Command system that was developed and implemented in Kingdom Hearts: Birth By Sleep, for the Playstation Portable. According to Siliconera, a few of the abilities have been revealed. Ice Breaker, Dark Breaker and Blizzaga will be in the final game. The 3DS game will be release in the spring in Japan. No release date has been revealed for other territories.

Nintendo warns of 3DS effects on under 6’s