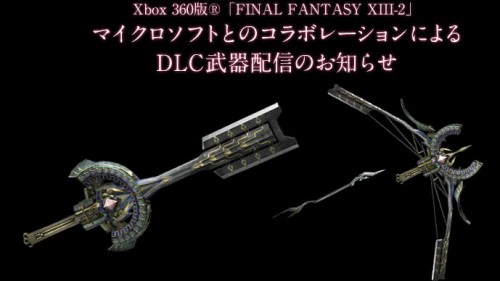 Square Enix announced today that, among the slew of DLC already announced, the Xbox 360 version will be getting at least one exclusive, the Azrael Bow.  The bow is a collaboration between Microsoft and Square Enix, meaning it’s only going to be available for 360 users (at a price).  The price is a scant 80 MS points ($1), though due to Microsoft’s “monopoly money” currency, you will need to drop at least $5 to accrue the points necessary unless you happen to have left over points from some other purchase.

The weapon boosts the chain gauge bonus in battle and can be purchased in-game at the Chocolina shop starting January 10th.  It’s unknown if the chain gauge bonus ability is accessible on any other of Serah’s weapons or if purchasing this will be the only way to get it.  This DLC will be released in the West at launch, though there isn’t any mention of the other DLC that has already been detailed.  It’s looking like those who are hardcore Final Fantasy fans are going to need to pony up a decent amount of cash on the side in order to obtain all of the content this game has to offer.  Remember the good, old days when all of the content made during development was put into the final product and if the game was successful enough they made an expansion with a respetcable amount of content to include the extra stuff?

Simon Belmont gets some love from Konami