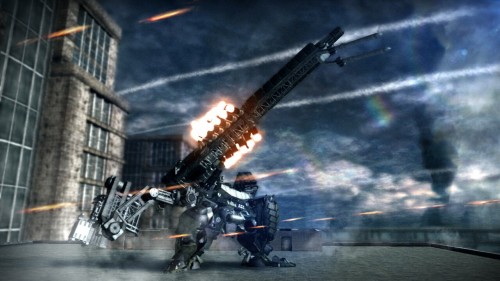 Fans of the Armored Core series should be happy to know that From Software’s newest installation, Armored Core V, is adding a new slew of weapons that are sure to turn some heads.  Dubbed “Over Weapons”, presumably due to their immense size and power, these tools of destruction are famed for being able to destroy a mech in one fell swoop and look cool while doing it.

Those who prefer to get in close and tear your opponent apart with a sword will want to get their hands on the Grind Blade.  The Grind Blade is a stunning assortment of six chainsaw blades attached to a gear.  The Grind Blade rips it’s victims apart by fashioning its blades into a drill to pierce it’s opponents with all six swords at once.

The Huge Cannon is pretty straightforward, as it’s name would suggest and is for the kind of person who prefers to deliver one massive blow from a distance.  It’s an immense cannon (roughly twice the size of a mech) which seems to be powered by another device held in the opposite arm.

Not too dissimilar is the Huge Missile which, again as the name suggests, is a device that fires a…well…huge missile.  This one appears to attach to the back of the mech and will fire upward, meaning it would be perfect for hitting a mech who’s far away and is hiding behind some sort of cover.

The last of the Over Weapons that was so far revealed by From is the Multiple Pulse.  The Multiple Pulse seems to be the most peculiar weapon.  It appears to be a massive array of generators that wrap around your mech and fire electricty at your opponents.  In some of the screens it also appears that it is capable of rapid firing bullets?  It’s a little hard to discern what is actually going on when there is so much awesome flying around the screen, but it’s safe to assume that whatever it does, your opponent won’t like it.

Armored Core V is slated for Japanese release on January 26th.  No date has been officialy set for localization yet, hopefully it won’t be too far off from the Japanese date.

Making of Enslaved: Odyssey to the West- Video #3