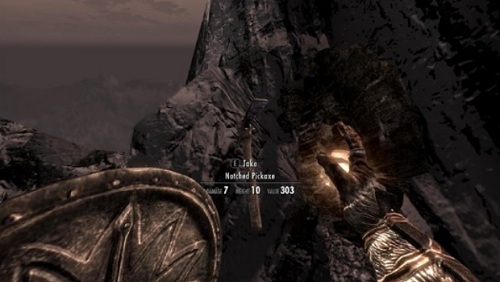 While the lawyers of both Bethesda and Zenimax prepare to go to battle once again to see who can squash the other, the developers at Bethesda obviously hold no problem with Mojang Games, especially their owner it would seem. The above picture was taken of an easter egg that was discovered in The Elder Scrolls V: Skyrim and reported to Ology.

In the picture above you see what is called a “Notched Pickaxe” which of course is a reference to Minecraft’s main tool to mine everything. Also, being that Notch is the name used by Minecraft’s creator this is a nice little easter egg and reference to the developer. For those eager to see this item themselves they can find it stuck in a rock at the Throat of the World, Skyrim’s largest mountain.