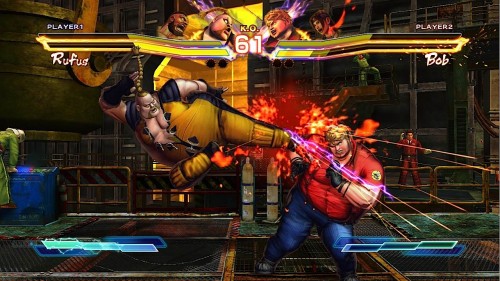 While he was teased last month, there was no official announcement about everyone’s favorite fat man from Street Fighter, Rufus, joining the character roster. But that has all changed at New York Comic Con where Capcom’s producer Yoshinori Ono revealed that Rufus would indeed by a fighter available in Street Fighter X Tekken.

Along with this announcement the above screenshot was released to show off the character fighting against Tekken’s fat man Bob. Though if they were actually teamed up it would most certainly be the largest team in the game… Yoshinori Ono went on to say that there are plenty of more characters to be revealed in the future, though there most likely will not be any more revealed at NYCC.

DmC Devil May Cry gets its first gameplay trailer