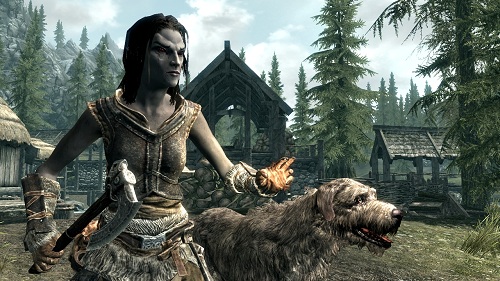 Let’s face it, there are still a little under two months until Bethesda’s Elder Scrolls V: Skyrim is released to stores. That may not seem like a long time to most people, but from everything we have seen so far Skyrim looks to be one of the most engaging experiences you can have with an open world adventure title.

Of course there is one group of people who have to see a game before it is released, and those people are the ones working at the ESRB (Entertainment Software Ratings Board) where they have to rate every game before it is released. Well today they released their rating for Skyrim and boy is it a large one. Some highlights are drinking contests which include slurred speech, all the whores you desire and plenty of enhanced combat. In the end Skyrim has been rated Mature, but check out the full ESRB rating summary below.

This is a fantasy role-playing game in which players assume the role of Dovakin, a prophesied figure with the power to combat dragons in the fictional world of Skyrim. As players traverse through mountainous open-world environments, they complete missions and quests that impact the eventual fate of their character. Players use swords, bows and arrows, axes, and magic attacks (e.g., fireballs, ice shards) to kill various enemies (e.g., wolves, dragons, human bandits and soldiers). As players engage in melee-style combat, some sequences are highlighted by slow-motion effects, particularly for decapitations. Large blood-splatter effects also occur during combat, and some environments are stained with blood or body parts (e.g., heads impaled on spikes). Some sequences allow players to injure/kill nonadversary characters, including prisoners chained to a wall; they scream in pain amid splashes of blood or fire.

As the game progresses, the dialogue and on-screen text contains references to sexual material (e.g., “. . . all the whores your heart, or any other organ, desires,” “She . . . raped the men as cruelly as Bal had ravished her,” and “Remember when you thought [he] was . . . intent on making you . . . into his personal sex slave?”). Alcohol such as wine, mead, and ale can be purchased and consumed by players’ character throughout the game; and in one sequence, players can engage in a drinking contest with another character, which eventually results in slurred speech (e.g., “One more. No problemsh . . . Thash grape!”).