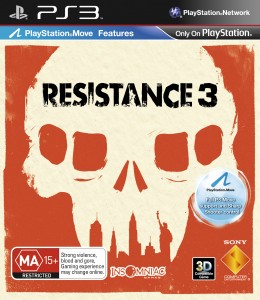 Sony Computer Entertainment Australia (SCE Aust.) and leading game developer, Insomniac Games; today celebrates the launch of the third instalment in the internationally acclaimed first person shooter series, Resistance 3 for PlayStation 3. Resistance 3 is the most anticipated chapter of one of PlayStation’s most esteemed franchises, loaded with amazing 3D graphics and action packed gameplay.

Four years after the epic conclusion of the second chapter, set in an alternate 1950’s universe, ninety percent of Earth’s population are dead or have been turned into Chimera. Reduced to hiding with other survivors, including his family in the ruined city of Haven, Oklahoma, fearless and brave survivor Joseph Capelli was near exhaustion fighting against the Chimeran menace. Dr. Fyodor Malikov arrives with hope and the opportunity to bring down the surrounding Chimeran force. Capelli leaves his family for New York, through the ruined US landscape.

Along the way; he encounters the remnants of humanity left in the aftermath of the brutal Chimeran invasion. There are a number of ways to play Resistance 3, which include:
· PlayStation®Move & stereoscopic 3D support: immerse yourself deeper into the warfare with PlayStation Move enhanced control as well as 3D gameplay
· Sharp Shooter: take down the Chimera with accurate precision with the PlayStation Move Sharp Shooter peripheral
· Multiplayer & 2 player online (or offline) co-op: team up with friends with the 2 – 16 online multiplayer and 2 player co-op mode – play through the story mode either online or split-screen

This episode brings to you a number of retail game editions to defeat the Chimera. Resistance fans will be able to enjoy ‘Special’ and ‘Survivor’ editions that are loaded with content and accessories.

Finally, a special Resistance: Fall of Man & Resistance 2 Platinum Twinpack that takes you to go back to where it all began, when the Russians closed their borders and it was feared they were developing a weapon of unparalleled power. The truth was far worse.

Get ready to come face to face with the Chimera once more with Resistance 3, exclusive to PlayStation 3, available now in stores across Australia.