Kirby may not have been at the forefront of gaming consciousness over the past few years, but he’s definitely persisted, starring in several handheld adventures. He’s somewhat known for being Nintendo’s guinea pig when it comes to new gameplay styles – he’s starred in many a puzzle, pinball and racing game, and his exploits on the DS (including the upcoming Mass Attack) have implemented touchscreen functionality quite well – but his newest adventure, Return to Dreamland, brings the series back to where it began, and where it belongs.

After a preview session at Nintendo HQ in Melbourne, I can say Return To Dreamland feels like the pinnacle of the franchise. Kirby’s Epic Yarn was an interesting side note in the series, and a great game in itself, but it didn’t feel like a “true” Kirby game. Kirby’s Return rectifies that: all the staples of the series are present, including the characters, enemies, environments, soundtrack, and gameplay, and the inclusion of new features fits the Kirby aesthetic and gameplay style perfectly. Every element of the design is reminiscient of the classic SNES and Gameboy games.

To many, including myself, the SNES game Kirby Super Star (or Kirby’s Fun Pack in Europe and Australia) defines the series, in terms of gameplay, visuals and sound. You’ll be happy to know that this feels like a direct follow-up to that game. The levels look much the same, with an obvious graphical update, making the cutesy visuals and vibrant colours so damn pretty. Of particular note was the familiar enemies, which retain their classic design but into the current gen. Everyone seems to be accounted for – those mushroom hat guys, the un-suck-up-able pig heads, waddle dees/doos/daas/etc and the rest. Even Whispy Woods, the iconic tree boss, appears as the final fight in the first world. 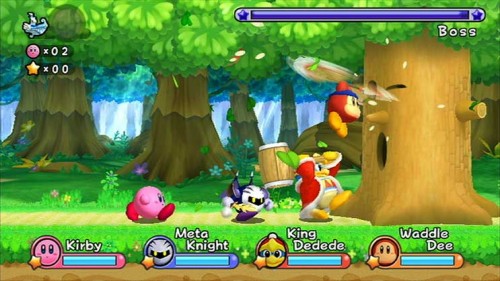 Of course, those are just the basic enemies. The lack of Kirby’s trademark inhale/copy ability in Epic Yarn was much lamented, but a return to his origins wouldn’t be complete without the return of the ability to mimic the powers of enemies you swallow. So of course, certain enemies in Return to Dreamland let Kirby use swords, beam wands, spikes, sparks, rocks, umbrellas and whatever else they happen to have on them. All the usual suspects return, along with a few new powers. Donning a flamboyant pink cowboy hat, Kirby has access to a whip, to defeat enemies or pull out-of-reach items into range of his stubby little arms. Or become Water Kirby, to shoot spouts of water at enemies or surf your way across the ground. I’m sure there are more newbies, but these were the two that I encountered during my short time with the game.

Absorbing a glowing enemy will grant Kirby a special super power, that can clear the screen or damage multiple enemies. These can be used more than once, within a time limit, and can be quite devastating. 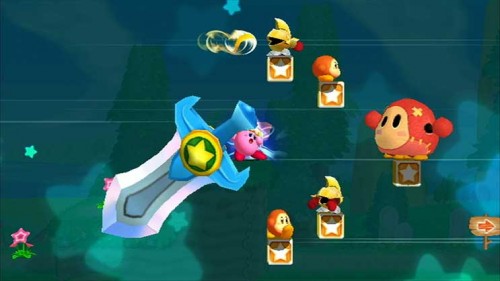 Gaining powers doesn’t just rely on absorbing enemies, but grabbing a capsule from a dispenser thing lets you take a power instantly. A similar method was used in Super Star, but was less common than seen here. Of course, this may be due to the fact that the game follows the other trend in Nintendo’s 2D platformer revival: multiplayer co-op. With up to four players jumping around at once, you’ll need enough powers for everyone.

My brother’s a bit of a control freak, so playing games growing up, I was always Luigi to his Mario, Diddy to his Donkey Kong, and the helper thing to his Kirby. The two-player co-op in Super Star made the game much more fun, and here it’s only an improvement. Additional players can take the role of King Dedede, Meta Knight, and a Waddle Dee armed with a spear, or any number of colour-coded Kirbys.

In New Super Mario Bros. Wii, all four characters had the exact same abilities, speed, jump height and length,  etc. There was no difference in how they played – that shame you felt when playing as a Toad was purely because your friends don’t like you.

Here, each character plays differently, with minor differences in the style of play they encourage. Only Kirby can absorb powers from enemies, but the others cannot lose their equipped power, so there’s a bit of a trade-off there. 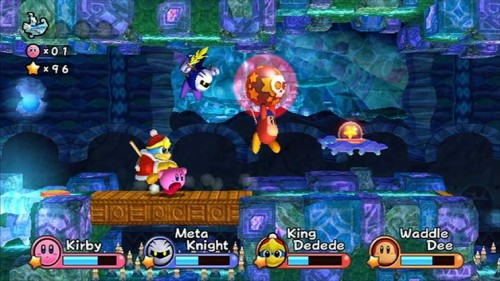 Meta Knight is, as he was in Smash Bros Brawl, a bit overpowered. He’s super fast, kills anything quickly, and will slash automatically on contact with an enemy in midair. Waddle Dee plays like Kirby, except his weapon of choice is an awkward, cumbersome spear. King Dedede is slower and heavier, but feels more powerful. He seems to be able to defeat enemies with fewer attacks, but it’s hard to tell. There’s really not much difference when they all die after a few seconds of combat anyway. In fact, I found him to be a little too slow, often struggling to keep up with the others.

Together, the new playable characters add some variety to the game, but in a way they detract somewhat from the “Kirbyness” of the game. It’s all too easy to just spam enemies and bosses with Dedede’s hammer or Meta Knight’s sword, rather than the strategic swapping of abilities that Kirby as a character offers. They would be fun to try, but my guess is that the game would be most enjoyable when played as an all-Kirby team.

As I jumped into the demo a few levels in, I missed what little story the game would provide. I’m a little curious as to what’s going on – with Dedede and Meta Knight playable, who is the game’s antagonist? I guess that will be answered in time.

Nintendo have been teasing us for years with the possibility of a new Kirby platformer for the Wii, and before that, the Gamecube. Now, his exciting return to form is almost here, and if you’re a fan, you’ll definitely want to return with Kirby to Dreamland.

Kirby is due to return on October 24th in North America and in December in Europe. Unfortunately, Australia is probably included in the European release window, and sadly, we will also have to endure the much lamer title of Kirby Adventure Wii. Whatever they call it, Kirby’s latest outing looks to be a lot of fun. 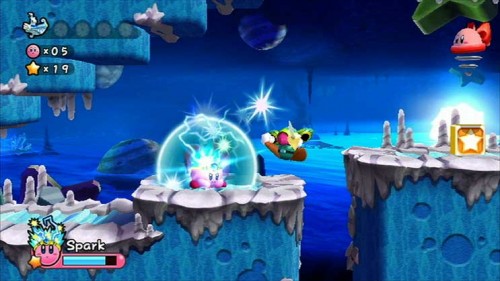 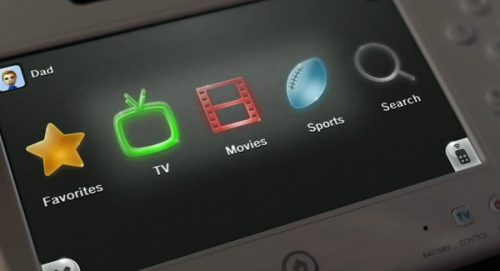