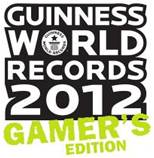 Matt Hampson, Patron of the SpecialEffect charity, is to attend this year’s Eurogamer Expo to launch two Guinness World Records Gamer’s Edition attempts. The charity is using the event to create records for the fastest time lap time in a racing game using only eye-movement sensing controllers and the greatest number of people competing in a videogames tournament using only eye control technology.

Matt is a beneficiary of the kind of accessible technology being showcased at the EuroGamer Expo and is championing SpecialEffect’s work in enabling those with disabilities to access technology and enjoy games. Matt himself is paralysed from the neck down, following a serious spinal injury the England U21 Rugby Player received while training. Undaunted, Matt set up the Matt Hampson Foundation to offer hope, support and inspiration to young people with similar injuries, sharing his experiences and raising vital funds. SpecialEffect is a charity set up to adapt video game technology so that those with disabilities can enjoy them. Together with Matt, they have worked to optimise the leisure benefits of all kinds of accessible technology including the eye-control system that will be used to enter the Guinness World Records Gamer’s Edition.

Visitors to the EuroGamer Expo will need to register at the SpecialEffect stand and then set their time around the track using just their eye movement. The participant with the fastest lap time over the duration of the Expo will be crowned the new Guinness World Record holder and considered for inclusion in the next Guinness World Records Gamer’s Edition.

The record attempts will showcase the advances SpecialEffect have made in designing and adapting technology to enable those with a disability or severe illness or injury to be able to play videogames, whether for therapy, rehabilitation or fun.

“I am delighted to be attending the EuroGamer Expo, not only to launch this record breaking attempt, but to show off the fantastic opportunities afforded by SpecialEffect and the team,” commented Hampson. “We want to use technology and game therapy to improve people’s quality of life, and SpecialEffect opens games to a wide audience of people who previously would not be able to take part. Games as therapy and entertainment are a force for good, we also extend our thanks to Guinness World Records for helping us to arrange the record attempts and the Eurogamer Expo – and hope that visitors to the Expo will join us in setting these all new Guinness World Records.”