Mixed Martial Arts are starting to gain a bit of momentum as of late, with the releases of UFC Undisputed and EA Sports MMA in the last couple of years. There is a third contender in the mix, Supremacy MMA. Instead of the flashy presentation that the former two games provide, Supremacy MMA is heading for the underground feel of the sport. After getting my hands on the game today, I was convinced that they could pull it off quite well.

The day started of with a chat with Tim, the marketing manager, and Julian, his boss, both from Tuff-Kat Entertainment, 505’s Australian distributors. Our talk was all about games, with some mention of the upcoming preview. As soon as we were done with our coffees, the three of us head to the room, where a demo of the game running. First off, Tim shows off the menu of the game. There were quite the selection of game modes. You have a quick fight mode, online, tournament, story, femme fatale and a tutorial mode. 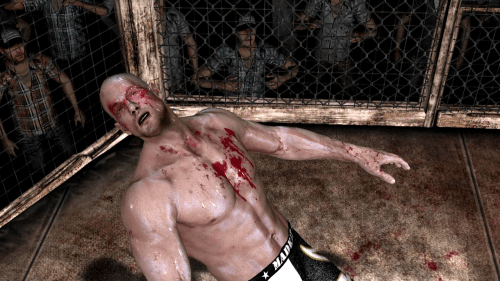 First off I was shown a quick fight. He chose St. John Ackland, who uses a submissive wrestling style. Right off the bat the gameplay is fast and brutal. The game uses a health based system and a body indicator to show what parts of the body are damaged.

Ackland’s efforts on his opponent pays off with a mix of punches, kicks and clinches. The animations are smooth and free-flowing, really emphasizing the fast pace action of the game. After that, we divulged into story mode. Each character in the game will have their own story attached to them, including a short backstory to set up the present situation. We explored Muay Thai fighter Malaipet, who has an emotionally charged backstory. His first fight was in a gym and he easily defeats his opponent. 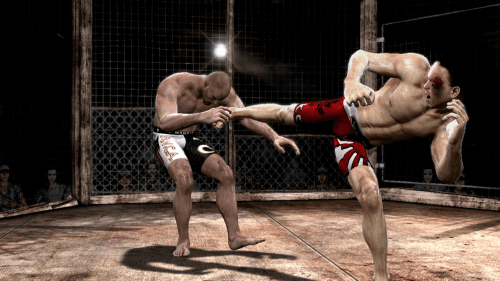 Then it was my turn to try the game. I went straight into the tutorials. They were very explanatory and eases you into the controls. Square and Triangle were the punch and kick buttons respectively. Left stick plus X will get you into a standing clinch. Doing the same combination will execute a takedown. Pushing the left stick up will high block while going down will block low. Other features include a side step and a powerful strike which can inflict heavy damage at a cost of vulnerability while charging up.

My first fight of the game was between Jens Pulver, former UFC lightweight champion, and Malaipet (via random). Pulver uses a boxing style and it shows, as Triangle often resulted in another punch rather than a kick. Despite my best efforts, I lost the match via decision, which is determined by health and type of moves performed during the match. There are three ways to win, decision, submission and knockout. I tried a couple of more fights before moving onto another story, this time Ilya Klimenko, a Russian wrestler down on his luck and working for a real asshole (excuse the language). Considering I like a bit of ground and pound, Klimenko suits my tactics. I fought in a few matches before moving on to the female fighting. Before I talk about that, I should note that no two individuals are the same. The game has a leveling system and players can earn experience points to make their fighter stronger. A neat idea. 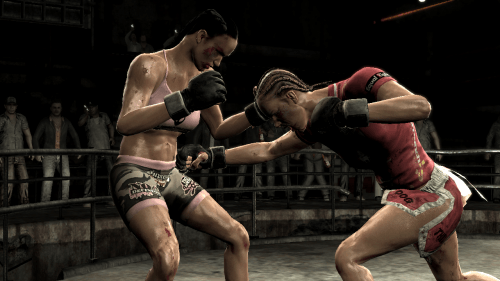 What makes Supremacy MMA stand out is the inclusion of female fighters Michele Guitierrez (who I picked) and Felice Herrig, both real fighters. There is a versus mode and a story mode. Gameplay wise, expect the same. The only question I raised is why are there only two female fighters? Considering this is being done for the first time in recent years, this must be testing the waters. We might see other female fighters as downloadable content, though.

The day ended with three fights with Tim to check out the multiplayer aspect. The game turns into a tug of war, with a lot of blocking and strategic thinking. There was a clinch glitch, but it was a debug version of the game, so there were a few things that needed to be ironed out. I did beat him in all three fights via decision. On that mote, my time with the game ended. Thanking Tim and Julian for their time, I left with a smile on my face. I was suppose to talk to the developers from the USA but a scheduling mix-up meant it wasn’t going to happen. Other than that, it was a great demo and it shows the potential that this game can achieve in the market.

Catherine English demo releasing next week on PS3 and 360