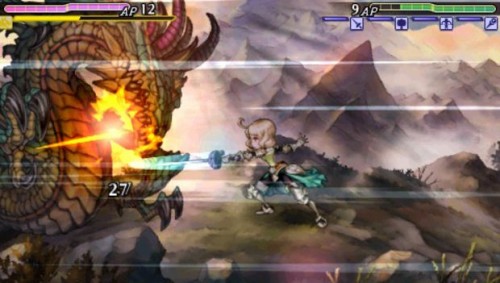 Yesterday XSEED began teasing their Twitter followers about a new project that they were working on and would be releasing in the near future. Once the hints began piling up, many people began making relatively accurate guesses it seems because XSEED has revealed that they are working on bringing Vanillaware’s RPG Grand Knights History to the PlayStation Portable in North America.

Grand Knights History is a turn-based RPG from the makers of Odin Sphere and contains hand drawn colorful graphics. Players will enter the world of Listia where three lands are battling against one another. The lands of Union, Avalon and Logres have long been at odds and you will take the role of a captain that must pick a side and fight for what you wish to.

When Grand Knights History is released it will be on both UMD and PSN download this Winter. European gamers will also be getting the title, except rather than XSEED publishing the title there it will be handled by Rising Star Games.

PSN may be online for developers

PlayStation Plus anniversary celebrated with bonus months with purchase