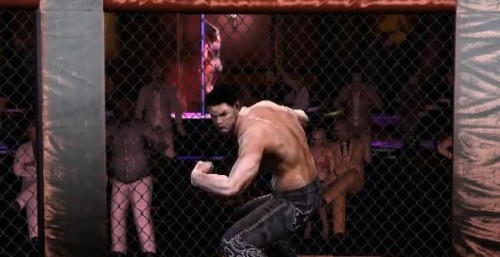 There is a good chance if you read the heading on this article, you might be a bit confused as glass slippers really don’t mesh too well with the upcoming Supremacy MMA. The Glass Slipper is actually a strip club though which will act as an extra level for players to beat eachother’s brains out in. This level will only be available to those who pre-order at Gamestop locations and will also offer up some roster expansion in the form of undefeated Strikeforce icon Shane Del Rosario.

This “slipper” seems to be a perfect fit for the brutal MMA title, and with the lovely dancers in the background there is sure to be many who house this area as their fighting setting of choice. With that said, there is only two weeks left until Supremacy MMA knocks it’s way out on to the PS3 and Xbox 360 (September 20th, to be exact), so it would be a good idea to run out and lock in a pre-order while this promotion is still active. You can see both Rosario and the new location on full display in a brand new trailer that 505 released earlier today down below.