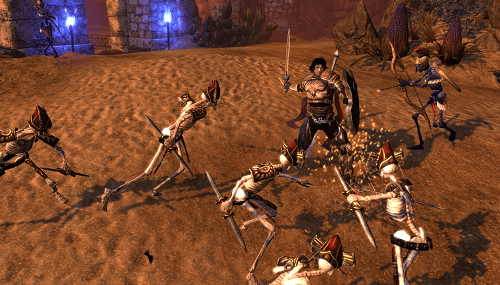 Earlier today Square Enix and Obsidian Entertainment announced that they will be releasing the first DLC package for Dungeon Siege III sometime in October. The DLC is named The Treasures of the Sun and will have players entering the Aranoi Desert, an entirely new area never before seen. Players will be on the search for a lost Legion hero and fight through new enemies and even discover a great treasure.

The DLC will add numerous hours of gameplay as well as raise the level cap on characters up to level 35, five levels higher than previously allowed. This means that there will be plenty of new abilities for your characters to learn and unleash them on the new enemies that can be found in the Aranoi Desert. The DLC will cost $9.99 or 800 MSP on the PlayStation 3, PC and Xbox 360 respectively when it is released.