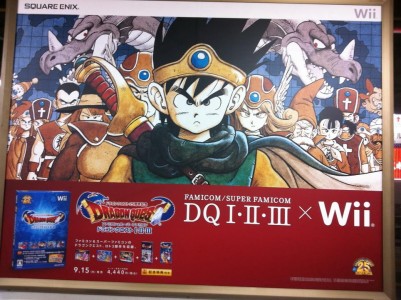 It is certainly a good year to be a Dragon Quest fan. Of course we already told you news about Dragon Quest X’s big reveal recently, but there is yet another title coming to the Wii that is sure to press some nostalgic buttons for some. Dragon Quest Anniversary Collection is set to release just nine days from today in Japan (September 15th for those of you bad at math), and will bring together the Erdwick trilogy in one snazzy package. Not only will players receive Dragon Quest 1, 2, and 3, but also included on the disc will be the Game Boy Color ports of Dragon Quest 1&2, and Dragon Quest 3 (also known as Dragon Warrior during the original western release).

To add in those last elements of spice, fans can also expect to find a mini-medal replica made famous by the series along with a reprinted Shinken NES strategy guide for the original trio of titles on the disc. Quite a nice package indeed. You can watch the official trailer for the compilation below, and once we hear any word of localization, we will be sure to inform you all so stay tuned!