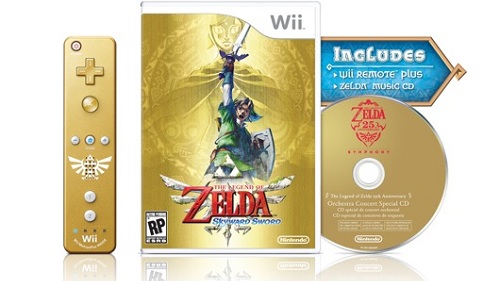 Today Nintendo announced some information regarding their release of a limited edition bundle for The Legend of Zelda: Skyward Sword. The bundle will sell for $69.99 and will not only come with the standard game and soundtrack CD, but also a gold Wii Remote Plus. The soundtrack CD is included in all copies of Skyward Sword and will feature the orchestral versions of songs from the series which will be performed at the upcoming 25th anniversary concerts.

As you can see above the golden Wii Remote Plus is actually very neat looking, but it also serves a double purpose. The Legend of Zelda: Skyward Sword will require the use of a MotionPlus or Wii Remote Plus, so if you don’t have that yet, perhaps this bundle is the best way to go. If not then the normal edition of the game will cost $49.99 and will be released on November 20th alongside the limited edition.