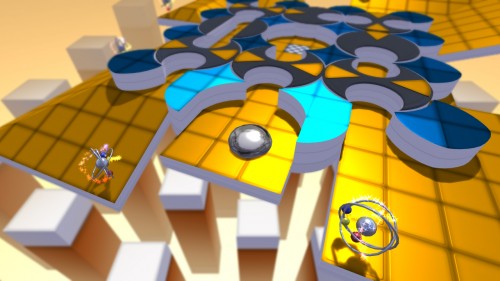 If you have never heard of the Mercury series, now is a good time to take notice. Mercury was originally released for the PSP in 2005, where the concept was to have the player tilt the in-game world back and forth to slide the substance into an appropriate destination. After spawning a sequel that reached multiple platforms just a year later, UTV Ignition are out to bring the unique puzzler to the Xbox Live Arcade and PSN this fall in the form of Mercury Hg.

This title will feature 60 all new and “deviously constructed” levels for player’s guide their silvery blobs through. Mercury Hg will also keep the same formula of gameplay of it’s predecessors, with the “Mercury Blob” changing color to finish appropriate puzzles and dividing into multiples if cut by a protruding surface. PSN users can also take advantage of the game with the rarely used SIXAXIS function, adding in some motion control support to the playing field.

Check out the new screenshots below and get those point cards ready, as Mercury Hg releases in September at a low price of just 400 points (£3.99 or 4.99 EUR SRP for the PSN).

Legend of Mana coming to the PSN tomorrow