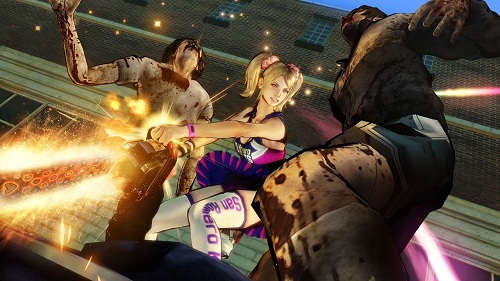 Zombies? Check. Chainsaw? Check. Cheerleader? Check. Happy-go-lucky Music? Double check. If any of those things peak your interest then you may want to take a look below as Suda 51’s upcoming game, Lollipop Chainsaw has received its first trailer from Gamespot. The trailer itself shows off plenty of gameplay and a little bit of cutscene as it introduces us to our heroine.

Being a cheerleader in high school may seem like one of the best places to be, but not when you have a secret that involves having to fight the undead. Of course when all of this is shown off with the peppy song “Lollipop” in the background, it just makes it all the better. Lollipop chainsaw is going to be released sometime in 2012 and it will be brought over to the PlayStation 3 and Xbox 360 by none other than Warner Bros.

Lollipop Chainsaw cartwheels to North America and Europe in June