Welome to the first and sadly last Geek Freak of the 4 week. This series will sadly not continue but it might return in the future. So please do enjoy this last entry and if you want it to continue well you can always email MasterAbbot (info@capsulecomputers.com.au) and tell him so.

The winner this week is … Cellophane Girl

Okay so this weekend was my birthday. I celebrated it by basically totally geeking it up all weekend. Saturday (my birthday) my friends and I went to a store in the area called “Blast to the Past”, which honestly has degraded into a huge store full of junk and hidden treasure. We spent 2 hours looking through stacks of just about EVERYTHING you could possibly imagine. We would have stayed longer but it was over 100 degrees out, and the place had no air conditioning or airflow. 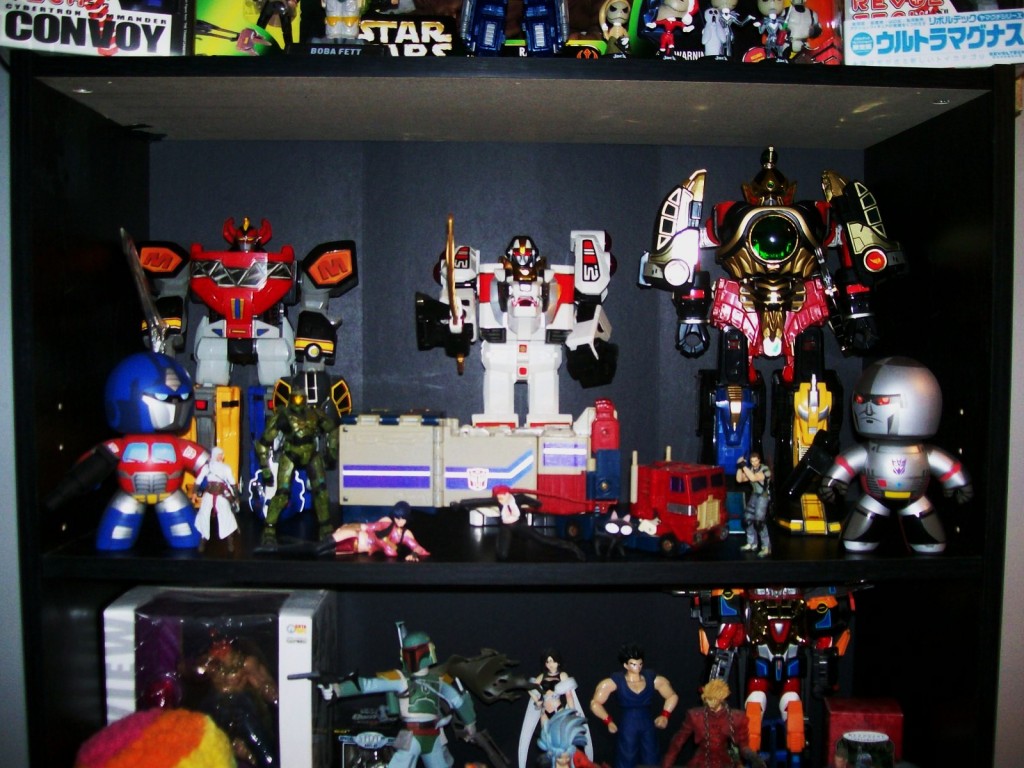 Everything in the store is a dollar.(25 items for $20) We sort of hit the jackpot on some comics. I think we bought a total of 100 comics. Which of course caused us to pull out the long boxes we had all our comics stashed in when we got home. We spent HOURS talking about comics while we looked through what we had.

On Friday My fiance had to buy a whole new shelf just to have some place for all of our figures. We have dubbed it “the shelf of awesome”. He also lined the entire hallway with Star Wars figures. 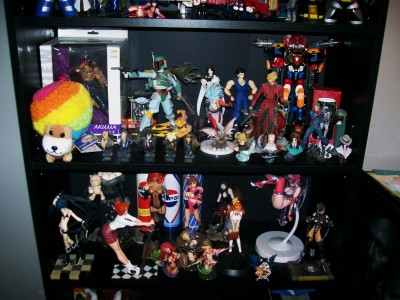 Friday 3 of us went to a few fleamarkets to look for comics. I didn’t find any comics I wanted (the other 2 people who went with me both got some good deals). But as we were leaving I found this 4 figure set from FFVIII (which is one of my favorite games). I pretty much pushed the people I was with out of the way and said “OH! I’LL TAKE THIS!”

If you’re annoyed because you didn’t win, well you need to know that Cellophane girl won because she wrote about one incident, took photos and the entry was the geekiest and maybe the weirdest. So well done Cellophane Girl, you get something from MasterAbbot’s Goodie Bag. 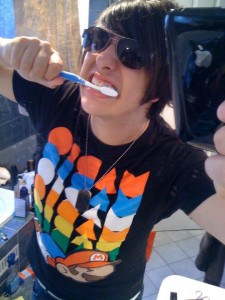 This one time we got a new chick in our TAFE class, who was a major hottie. Being the awesome dude I am, I tried to act cool just to impress her. But no, I had to ruin that didn’t I?! Somebody mentioned a scene from Terminator 1, claiming it was in Terminator 2 in class. He also called the Terminator a cyborg. I had to correct this fool! So my inner nerd was released, and I began shaming him out in my Terminator knowledge and began a 10 million year-long rant. Needless to say, the girl lost interest in me and I struck out straight away cause of that. As much as I blame Arnie, I still stand by the fact that pawning this n00b was was worth it. Kind of. 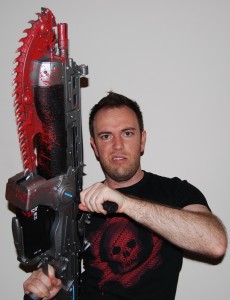 I have like maybe 2 rooms full of video game memorabilia. I don’t know where to start, I have Atari 2600, CBS Coleco Visions, Matel’s Intellivision, Nintendo consoles, NES, SNES, N64, Gamecube, on both AU, US and JP formats along with all the Gameboys from the original to 3Ds (AU and JP)  including some of the cute little Gameboy Micros, Oh I also have like 20+ original Game & Watches from Nintendo, like Donkey Kong, Parachute, Octopus, Donkey Kong Jr, Fire, Fire Attack, Mickey Mouse, Popeye. Sega MasterSystem, Mega Drive + plus the 32bit extension, Saturn, the DreamCast (about 3 of those). The original Sony Playstation, PS2, PS3 (2 of them),the XBOX (3 of them) the XBOX 360 (4 of them) I know I’ve missed out on something for sure.

Then we move on to the FREAKY amount of Capcom stuff that I catalogued and shared over at Capcom-Unity before I started Capsule Computers, this is when I actually had time to do this short of stuff. I have probably ¾ of my Capcom stuff catalogued and photographed. I don’t think I could ever go back and do the rest as I just dot have enough time, but I’m still collecting like CRAZY !!!

Now lets not get started on games. I believe I have between (and this is an approx, it could be more) 1000-1500+ games on all consoles dating back to the Atari. Just on the XBOX I have over 150+ games that I haven’t even opened yet. Yes I buy games and then leave them shrink wrapped. WHY ?? BECAUSE I HAVE FRIKEN PROBLEMS !!! 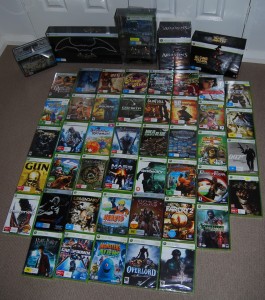 This was taken approx 1.5 years ago there is a crap load more now (nearly trippled)

Then we have toys, figurines, Knick-Knacks such as Pac-Man pins and magnets, Asteroids keychains, a truckload of Super Mario toys and figurines, Gears Of War figures including my GEARS OF WAR LANCER! and also hidden in the Garage I have my prized possession, my original DOUBLE DRAGON stand up arcade machine, I also have the boards for Double Dragon 2 and 3 as well along with Street Fighter 2 and Commando and Ghosts ‘n Goblins. 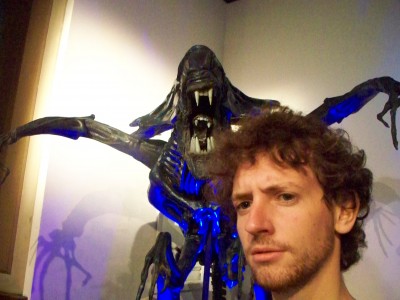 I don’t really even remember how it began, but sometime in early High School I started cobbling together everything I could find, and damn, The Simpsons is a marketing juggernaut.

There are the usual things like glasses, mugs, figurines, soft toys, tins, clocks, etc, but I prefer the random stuff. Among my collection are Simpsons guitar picks, shoelaces, a doorbell that quotes Homer; a cuckoo clock in the shape of Moe’s, with a little Homer who pops out and Woo Hoo’s on the hour; a remote-controlled version of the family car, that hideous pink thing; a working telephone; an Etch a Sketch, and board games with a Simpsons twist. I’ve never lived in a place with enough room to set everything up on display, so most of it is in boxes. The image included is only the contents of one of the Roll N’ Store boxes. There are six more, plus several of those massive canvas bags. 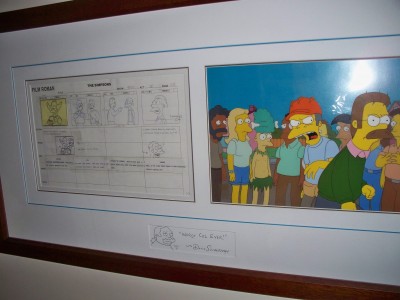 But my piece de resistancé is either my 5-foot Homer statue who sings and dances on a motion sensor, or my official production art, including a pencil sketch of Homer, 2 animation cels and a storyboard page, all signed by various directors. 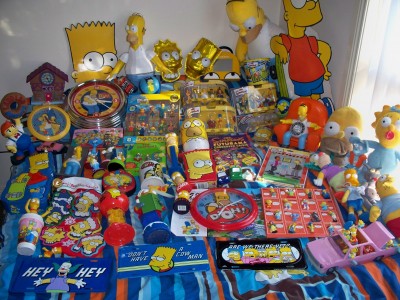 I also have the uncanny/awesome/geeky ability to identify most episodes by a single quote, or the first few minutes, and spout the episode name and season. I don’t actually know how this superpower evolved: I didn’t deliberately learn them, but it sunk in somehow.

Well thank you so much for joining me in this weird and fun adventure. I hope you do at least enjoy the rest of other weird articles.