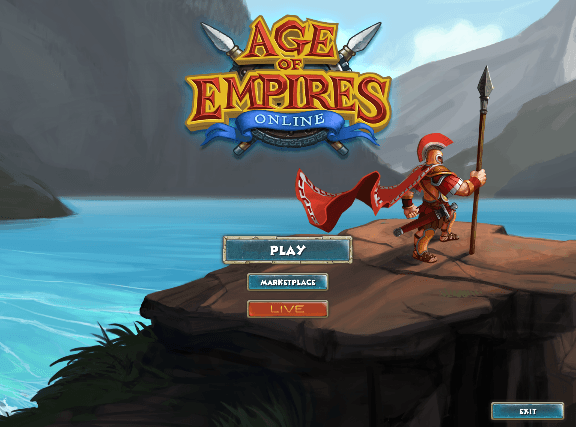 For many gamers, the Age of Empires series has stood out as one of the quintessential strategy games of this generation. Many of us grew up playing it and many to this day hold other RTS games to the standard of AoE, especially if it takes on the role of historical strategy. I myself first experienced Age of Empires when I was 9 years of age, playing through the very first entry into what would become a long running, and highly successful series. It was the very first game I had played that actually required any resemblance of micromanagement skills, and building an army to crush my opponents. And c’mon, we all remember the “Big Daddy” and “POW” and “E=MC2 Trooper” cheats don’t we? To this day I still enjoy playing Age of Empires 3 and the spinoff Age of Mythology with my friends.

So when I was offered the chance to play through the latest entry to mark itself proudly under the Age of Empires title, I jumped at it. Before I expand on my impressions of the game, there are a few small details that need to be pointed out. Firstly, unlike the previous “Age of” games, Age of Empires Online was not produced by Ensemble Studios, the same group that created the last few AoE games. Instead, this instalment was produced by two teams: The lesser known Robot Entertainment and Gas Powered Games, who were the same creators of Demigod and Supreme Commander. The second point I must also make is that the full version of the game is available for download, and it’s COMPLETELY FREE to play. There’s a bit of good news. 🙂 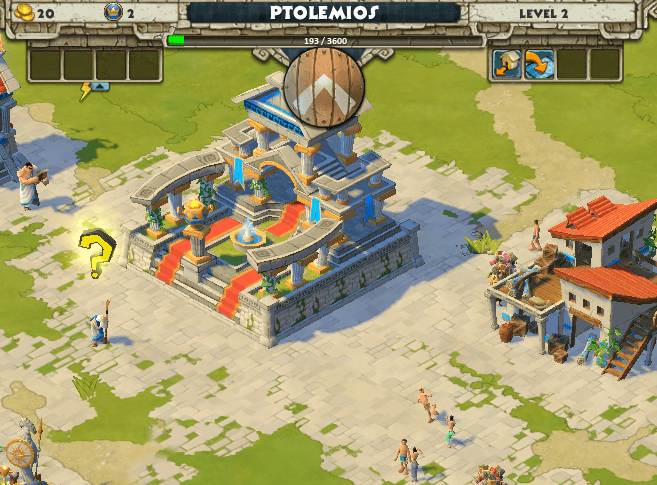 To begin with, I was most interested to see how the “Online” section of the title would impact upon the core gameplay of a much beloved series. After all, the previous instalments were already online compatible for multiplayer. The game basically combines many of the central features that one would expect from a standard RTS with those of an MMORPG. At the very beginning of the game, players are assigned a home city according to the race of their choosing. It should be noted that at present, only two races are available to play, the Greeks and the Egyptians. Two races of equally significant historical prowess. During my play-through, I selected to play as the Greek empire, creating a home city named Ptolemios. Free cookie for whoever knows why I chose that name. 🙂

When dropped into the home city, I noticed that there was not of a heck of a lot to do, besides browse through messages, and micromanage the limited number of starting resources I had. I quickly realised that the home city function operated in very much a similar fashion to the home city mechanic of Age of Empires 3. While the home city itself has limited interaction, the players actually partake in the strategy element of gameplay in other regions. The home city essentially acts as the quest HUB, where players receive specific quests from quest givers, and later return to obtain their rewards for their efforts. For example, one of the starting combat quests is provided by an old man who wants you to drive out the bandits threatening one of your nation’s villages. Subsequent quests later given involve re-building the village and re-training the population to perform the tasks that are essential for the establishment of an empire, and more importantly, an army. These opening quests essentially serve as an in-game tutorial to player who want to know how the heck this MMORTS genre works. 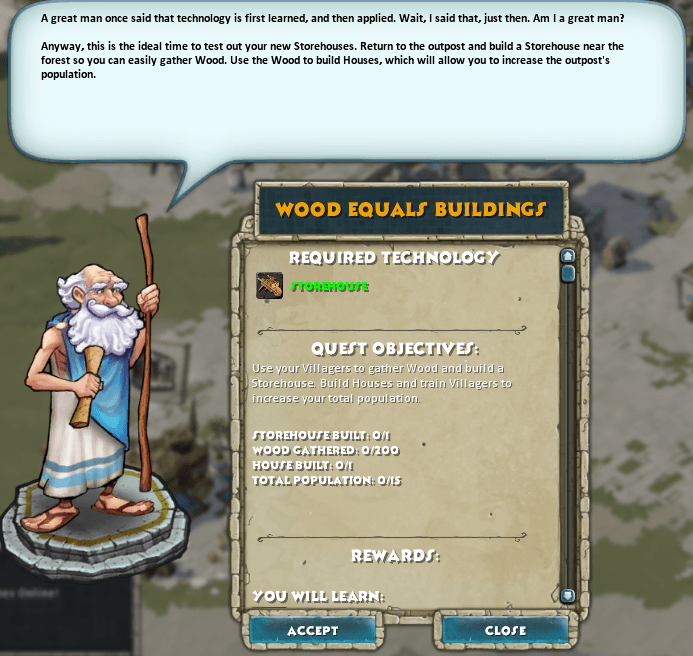 It was not long before I had my home city up and running, with basic soldiers and upgrade functions working, and the micromanagement of villagers had been assigned. Everything was operating in a very similar fashion to how I was used to in a standard AoE game, with the exception of the quest and expansion mechanics. However, the multiplayer option hovered above my head like an all too tempting piece of candy. I decided “What the heck? Let’s give this a go.” I decided to take my virtual mini empire online to see how these RTS PvP games worked.

Turns out that piece of candy was attached to a string trap. Which was electrified. With which I was subsequently beaten into submission. I got DESTROYED. The player I came up against in my randomly generated match had clearly expanded and built up their empire far more so than my own. The PvP multiplayer match flowed very much the same way as a standard AoE custom match. I was facing off against another Greek Empire, but my opponent had far more powerful units than I, and could produce them much faster. Now I know why the home cities have levels.

Even in my defeat, I discovered something really cool. One of the really creative features of this game I found is how players are able to use the Empire that they build up in their own single player or co-operative game modes for combat in PvP mode. By completing tasks in single or co-op multiplayer, players are able to obtain resources and rewards with which they can unlock upgrade and additional units that can be played in an online PvP match. Essentially you bring your SINGLE PLAYER Empire into the MULTIPLAYER universe. 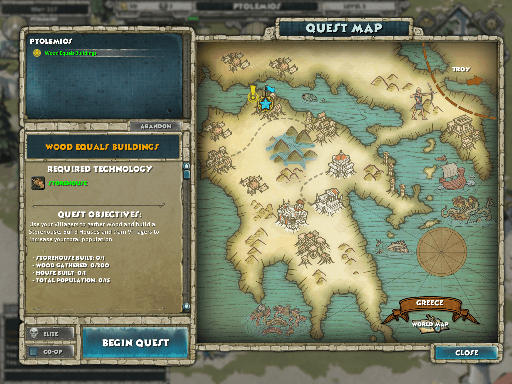 The single player mode, while encompassing the elements of standard AoE strategy, are essentially objective based, purpose-made maps for players to challenge themselves to help expand their Empire. When given a quest, such as to harvest wood for resources, the player will be transported to a forest rich area of their Empire in which the standard RTS controls come into play. It was highly reminiscent of quest selection and undertaking in Starcraft 2. (Which I have also recently been playing on the sly.)

As far as criticisms go, the only one I really have to give at this early stage is the same with any F2P (Free to Play) online game. If you want an experience that is more than just the basic downloaded package, you have to pay for it. Rare items, units and structures are generally reserved for only the paying players if they choose to make a purchase at the trade centre of their home city. However, bear in mind that the game IS free to play. I guess beggars can’t be choosers, but I can’t help but feel that I’m missing out on something. And I am a NOTORIOUS completionist when it comes to video games. 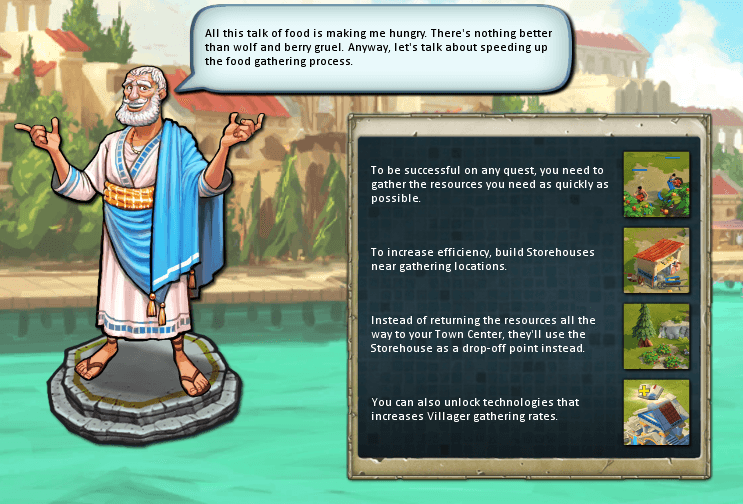 I also found in online forums and the MMO style chat box in the game itself, a proportion people have been criticising the visual styling’s of the game. I personally enjoy the cartoonish art style of the game. Age of Empires has never really been a series about graphic realism, has it? The cartoony style of violence that gets implemented in combat scenarios reminded me heavily of Worms. The environments are well designed, and for a free online game, the graphics requirements are pretty low. I feel that if too much detail were to be poured into graphics, it would sacrifice frame rate aspects and demand more from the user’s computer. In a game designed to be played online with many people, sending too much information in that regard would have the potential to crash the game servers altogether. Keeping the graphics a simple affair not only ensures that graphics and information transfers online are minimalised, it also maximises the potential player base for those who may play on computers that are less advanced than others.

Insofar, I have very much enjoyed Age of Empires Online. The gameplay is fluid and operates almost exactly the same way as previous AoE titles. The implementation of the Online elements I feel is performed very well, especially in regards to the cross-over between single and multiplayer realms. Creating an MMORTS that plays well and features a very unique and comical graphics style is a winner in my book. And let’s not forget, it’s FREE. If you want to have a unique RTS experience in an MMO universe, either alone, or with friends, Age of Empires online is definitely a game worth your time.

The Witcher Battle Arena out on Mobile Devices