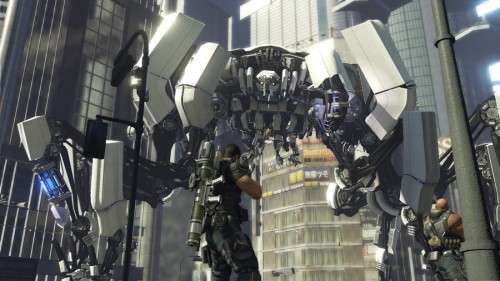 Hasta la vista, baby! This is how all those Terminator games SHOULD have been done! Binary Domain is an upcoming Sci-Fi squad-based third-person shooter in development by SEGA, bringing all our fears of robots taking over to an artificial life. Set in Tokyo in the 2080s, this battle with technology (and no, Im not referring to that ‘blue screen of death’ you see when using Windows) has you playing as a leader of a military squad that can either gain or lose respect for your leadership, and features voice-enabled commands via headset.

Today SEGA has launched a trailer for Binary Domain, showcasing the various weapons you can use to take out these iRobots.(That was a two-in-one pop culture reference there, you deserve a gold star for you if you got that one!) Check out the trailer below, it’s looking amazing, like Yakuza meets Terminator Salvation, except Christian Bale’s not complaining about professionalism and Binary Domain has awesome Giant Robot Spiders like in that Wild Wild West movie, but cooler. Maybe SEGA is a bit of a Will Smith Fan? This title is looking fresh and original and is sure to be a huge hit, so make sure you check out the trailer below! Binary Domain is scheduled for a February 2012 release for PlayStation 3 and Xbox 360. Hopefully I’ll think of a few more creative robot references by the