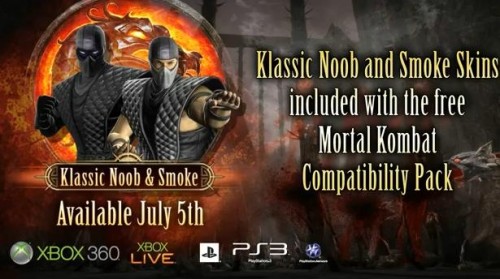 Much like the fresh batch of skins we received for Sektor and Cyrax a couple weeks back, Noob Saibot and Smoke will also be getting new skins donning their classic attires next week. This DLC will come free with Kenshi (who also makes his long awaited debut to MK9 on the same day) or with the latest compatibility pack and will be available on July 5th for the Xbox 360 and Playstation 3 versions of the game.

Along with the announcement, a new trailer was also revealed that shows the once linked warriors in action, looking better than ever in their downloadable attires. With all of these Klassic costume additions as of late, I am curious if Sonya may be the next chosen to receive her older wardrobe (pigtail and all). Either way though, MK fans have another reason to celebrate as Netherrealm are yet again offering up free DLC to further support Mortal Kombat. Check out the new trailer below.