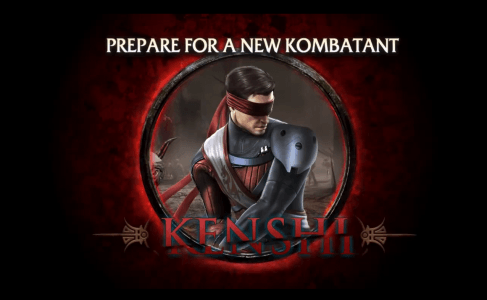 Kenshi, the blind Japanese swordsman from Mortal Kombat:Deadly Alliance was announced recently as a DLC, making him the first character from a home console-exclusive Mortal Kombat game to appear  as a playable character in the latest MK. A gameplay video of the character was released late last week, and today his character vignette has been released as a preview of his story. His storyline is basically the same as it was in MK:DA, with Shang Tsung appearing as an old man named Song, offering Kenshi a legendary sword if he claimed it himself. However, claiming the sword released many ancient warrior souls which Shang Tsung consumed increasing his power, who then blinded Kenshi and left him to die. The mystical sword ended up guiding Kenshi to safety, who recovered and voweled revenge on Shang Tsung. His blindness made him handicapped, but he trained to use it to has advantage and heightened his senses and learnt telekinesis, now vowing revenge on Shang Tsung.

The downloadable blind swordsman will be available on Tuesday 5th July for Xbox LIVE and Wednesday 6th July on PSN and will join the first downloadable kombatant, Skarlet who is currently available for download as well.

Mortal Kombat – the fight begins for the UK on 21st April