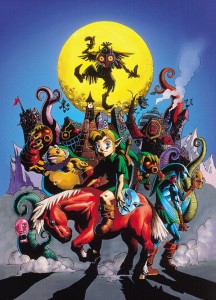 Sitting back, day after day, getting through the Master Quest in The Legend of Zelda: Ocarina of Time, I have to face the fact that eventually the game will end. With about half of my gold skulltulas collected, there isn’t that big a desire to find an online walkthrough and collect the other 50 once I have defeated Ganondorf, for possibly the 15th time in my life. As Link might do, I think back to my younger self and ask, what would young Kyle do in this situation? Back in 2000, the answer would have been obvious, you have finished Ocarina of time now it’s time to start playing the next instalment, Majora’s Mask. While it was obviously going to be hard to live up to the legend that was Ocarina of time, Majora’s Mask served its purpose, and I can’t help but experience flash backs of its gameplay, especially the ability to run faster while wearing a bunny-hood, and want to relive these elements.

In a recent interview, Eiji Aonuma states the one of the reason behind the remake of Ocarina of Time was due to the high demand for it. They said they could remake it in 3D, and boy did they, just check out our review of the new 3DS remake for proof that they have done the original title justice. That being said, could a remake of Majora’s Mask see its way on to the 3DS? If the demand for the title was high enough, then potential is high.

As Aonuma says, “Thinking on it now, having a handheld Majora’s Mask where you could kind of just set things down on your own time – close it, set it aside and come back to it later – might be a gameplay element some fans will actually take to and might really appreciate. Especially considering how you really had to rush through the original game, in a sense.”

Personally, I would be completely happy with a remake of Major’s Mask, and agree that the ability to take your time getting through the game would add a pretty interesting element to the game, not to mention the obvious overhaul in gameplay and graphics that we have recently seen in the latest Ocarina of Time. Until it is certain, I guess I will have to relive the events of Majora’s Mask on my old N64 or through a downloaded version of my Wii. Is it just me or would others appreciate a remake of Majora’s Mask?

WiiWare/DSiWare Releases For This Week ending 28th May