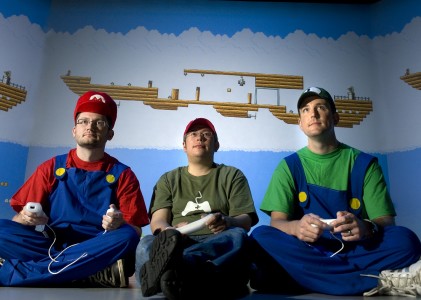 This past weekend, a group of friends in Indiana, USA, played their way through most of Mario’s platforming adventures, in a marathon lasting a hundred hours straight.

Why is this newsworthy? Because it was a charity event, and the guys and girls raised over $110,000 for the Child’s Play Charity.

This Mario Marathon was the fourth annual marathon that these guys have held, with last year’s raising $82,000.

They played their way through ten Mario platform games (from Super Mario Bros. on the NES right through to Super Mario Galaxy 2 on the Wii, and everything in between) and set donation amounts to specific levels; when the total donations hit that amount, the level specified was added to their playlist. The players were only allowed to stop once they completed all the levels in the playlist – no easy feat with people constantly donating and extending the playlist.

As a result, their session lasted from 11am Saturday until Tuesday.

Their progress was streamed live on their website, showing the game being played, and the costumed participants in a room decorated with Mario-themed everythings. Viewers were able to communicate with the participants directly via Twitter, and watch as the sleep deprivation slowly takes hold.

$110,000 for playing Mario is a damn good effort, and will not only help the kids benefiting from the Child’s Play charity, but also help to bring video games into wider acceptance as an important medium.

The marathon may be over, but there’s no reason you can’t still donate! Head on over to mariomarathon.com or childsplaycharity.org.