Madman held their panel today at 11:30 am Sydney time. Fans not present at Supanova have been eagerly awaiting at their computers for any sign of the announcement to hit the web. Finally the announcement details have surfaced.

Madman has announced today that they have acquired the following titles: 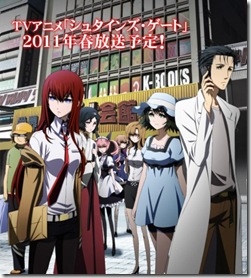 These come as a surprise to many fans speculating titles such as The Disappearance of Haruhi Suzumiya, Fairy Tail, Kekkaishi or the re-licensing of YuYu Hakusho to be announced. All of which may still be on the table with Supanova Perth still around the corner.

Perhaps the biggest acquisitions are the two most critically acclaimed series of this anime season; Deadman Wonderland and Steins;Gate.

Thus far no more information such as DVD/BD release dates, streaming dates or airing dates have been announced. However we will keep you updated on all the latest news and announcements from Madman Entertainment.