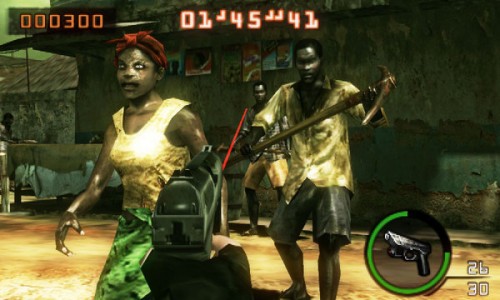 Earlier today we reported that Resident Evil: The Mercenaries 3D uses a unique method of game saving. So unique in fact it actually raised quite an outcry with gamers. RE: The Mercenaries 3D saves all of it’s information on the 3DS cartridge itself on one save file meaning that it is completely un-deletable. Now this news was met by some with shrug but used game companies aren’t taking this news laying down.

Destructoid has actually managed to talk to a number of different GameStop sources a well as receive a statement from a Capcom representative on the save method. Apparently many GameStop managers in the United States have claimed that they were told to not accept any used trade-ins of The Mercenaries 3D because of the one save slot, but still sell new copies. This method is a bit less severe than EB Games’ decision to simply not stock the game at all.

“In Resident Evil: The Mercenaries 3D, all mission progress is saved directly to the Nintendo 3DS cartridge, where it cannot be reset. The nature of the game invites high levels of replayability in order to improve mission scores. In addition, this feature does not remove any content available for users. Secondhand game sales were not a factor in this development decision, so we hope that all our consumers will be able to enjoy the entirety of the survival-action experiences that the game does offer.”

Could this have simply been happenstance and is being taken way out of proportion by used-game retailers everywhere? Or was this actually planned by Capcom and they simply won’t admit to a rather back handed way of punishing consumers with only one save slot with absolutely no chance to adjust? What do you think?