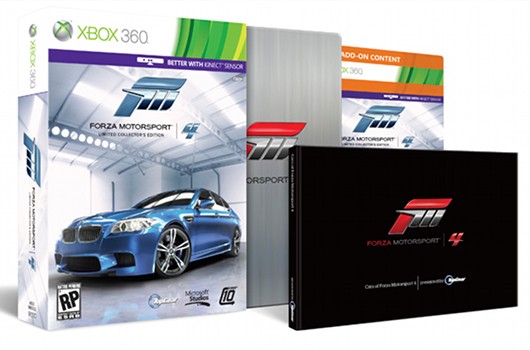 It comes as no surprise that Forza 4 would be released with a collector’s edition variety, but this time aroudn its coming with what Microsoft is calling a Limited Collector’s Edition and it will be available alongside the normal version of the game when it is released in October of this year. The whole package will contain a 96 page photo book, four bonus car packs,  exclusive BMW dashboard theme, vinyl stickers and some sort of “special recognition in the Forza community.”

The carp packs will provide plenty of extra variety, such as the VIP pack which gives players five of the worlds fastest cars, such as the Lamborghini Gallardo LP570-4 Superlegger. Also players’ garages will already be full of ten American muscle cars that have not been detailed. The 96 page photo book is going to be called Cars of Forza Motorsport 4 and it will be presented by Top Gear. The book will highlight the game’s vehicles by using images from Top Gear’s own collection of cars. Currently no price has been announced for this LCE but expect it to be around the $70-$90 range.