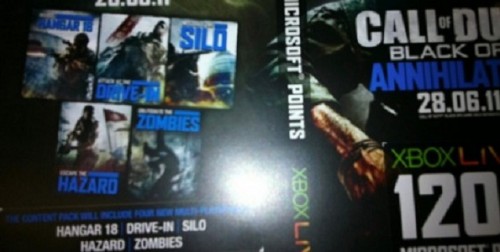 Activision usually has trouble keeping a tight lip on information concerning their map packs and the latest installment, Annihilation, was no exception. After a little bit of a leak to everyone yesterday, Activision confirmed today that they are planning to release the Annihilation DLC pack on June 28th on the Xbox 360 first with subsequent releases on later dates for the PC and PlayStation 3.

The map pack will cost your average expensive 1200 MSP ($15) and will include four new multiplayer maps and of course everyone’s favorite… a zombie map. The four new multiplayer maps will be called Hangar 18, Drive-in, Silo and Hazard while the zombie map will be called Shagri-La. Shagri La is an exotic zombie map full of deadly traps and dark secrets that will give zombie survivalists an experience they have never seen in a zombie mode yet.