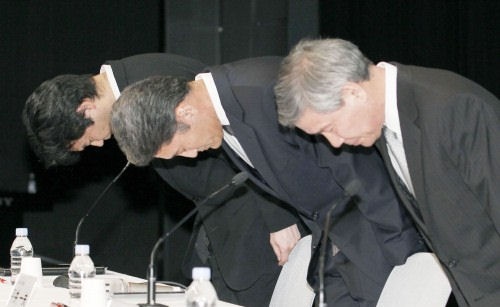 Consumers have rightfully been very upset with the PSN outage, with some trading in their consoles completely for the Xbox 360. But what about video game companies themselves? Publishers and developers have lost plenty of money due to this outage, with Capcom claiming to have lost hundreds of thousands of dollars already with the downtime and companies such as Aksys who released Arcana Heart 3 which is only available digitally in the US the same time the PSN went down, effectively cutting any sales immediately to nothing.

Now Sony has talked to its user base and apologized, but apparently developers and publishers haven’t been given the same liberty. A letter was sent out yesterday to Sony’s various publishing partners and was leaked to Industry Gamers. The letter addresses some of the actions that Sony has been making to bring the PSN back up and restore services but is all a bunch of pretty words when it comes down to it. Many companies have developed games for the PlayStation Network only, and not all of these publishers or developers are rich.

As you know, certain PlayStation Network, Qriocity and Sony Online Entertainment service user account information was compromised in criminal attacks against our networks. I want to assure you, as a PlayStation partner, that it is Sony’s top priority to restore our network operations and see that business is returned to usual as soon as possible. We are working around the clock to restore service, but will do so only when we can ensure that the network can operate safely and securely. In the meantime, we greatly appreciate your patience, understanding and goodwill.

• On Tuesday, April 19, 2011, Sony discovered that several PlayStation Network servers unexpectedly rebooted themselves and that unplanned and unusual activity was taking place on the network. This activity triggered an immediate response.
• Sony mobilized a larger internal team to assist the investigation of the four suspect servers. That team discovered the first credible indications that an intruder had been in the PlayStation Network system, and six more servers were identified as possibly being compromised. Sony immediately decided to shut down all of the PlayStation Network services in order to prevent any additional damage.
• The scope and complexity of the investigation grew substantially as additional evidence about the attack developed.
• The forensic teams were able to confirm that intruders had used very sophisticated and aggressive techniques to obtain unauthorized access, hide their presence from system administrators and escalate privileges inside the servers. Among other things, the intruders deleted log files in order to hide the extent of their work and activity within the network.
• On Sunday May 1, using information uncovered by the forensic teams, engineers at Sony Online Entertainment (SOE) discovered that data had also been taken from their servers. They, too, shut down operations and on Monday, May 2, announced the discovery.

What Data Are Affected?

As you may know, personal data was stolen from approximately 77 million PlayStation network and Qriocity service accounts.

As of this writing, there remains no evidence that the credit card information was stolen and the major credit card companies are still reporting that they have not seen an increase in fraudulent transactions due to this event.

What Steps Are Being Taken?

We have taken aggressive action to give consumers peace of mind, protect them against the abuse of their data, and enhance our security systems moving forward.

We have already advised our consumers in the U.S. that we will offer complimentary identity theft protection services through a leading provider, including an insurance program of up to $1 million. Similar programs are being developed in other markets around the world.

In addition, Sony is taking a series of steps to enhance security of our network infrastructure. They include but are not limited to:

• adding additional automated software monitoring and configuration management to help defend against new attacks;
• enhanced levels of data protection and encryption, as well as additional penetration and vulnerability testing;
• enhanced capabilities to detect software intrusions within the network, unauthorized access and unusual activity patterns;
• implementation of additional firewalls;
• expediting a planned move of the system to a new data center in a different location with enhanced security; and
• appointment of a new Chief Information Security Officer.

Finally, to thank our customers for their patience and loyalty, we are offering them “welcome back” packages as soon as the networks are restored, including free downloads of selected PlayStation entertainment, 30 days of free service as well as service extensions for the number of days PSN and Qriocity services were unavailable, with similar benefits for Music Unlimited subscribers.

We of course deeply regret that this incident has occurred. We are working closely with the FBI to identify and apprehend the culprits who committed this crime against our consumers, our partners and our company. I know you can appreciate how widespread the problem of cybercrime is in society today. Although no company is immune, we are confident our consumer data will be protected by some of the best security measures available today.

As a valued partner we aim to keep the lines of communication open so that you are aware of our progress. Our focus has been to confirm the security of the networks, protect customer data and get the services back on line as quickly as possible. We will do our best to respond to all of your inquiries and we will do everything we possibly can to support you.

We are doing everything we can to bring these services back online as soon as possible. We will update you with more information as soon as we can, but please call your account executive if you have further questions. We thank you for your patience and look forward to moving ahead together in the months and years to come.