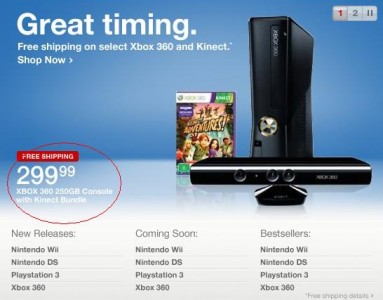 Each year, retailers usually spill the beans on many big company’s announcements. With that being said, it’s now looking like Target could be the latest to be added to that list due to a listing which has the Xbox 360 250 GB & Kinect for just $299.99, $100 off the MSRP. The actual advertisement can be found here(Unless it is taken down by the time you are reading this). If you actually click on the ad though, the price is still $399.99 for the bundle. Yes, typos happen, but with just a week until E3, one has to question if this could be one of Microsoft’s cards they plan to play at the event.

Since the launch of the slim, we have seen retailers offer gift cards heavily with the purchase of the rather expensive bundles, making this “coincidence” or “error” of sorts seem more of a future reality. If by chance the Kinect bundles do drop, the question then rises for the 4 GB unit as well as the Kinect price tag, which could very well see price cuts after E3 as well. It has been a year after all since the Slim made it’s debut and a nice summer price drop just seems to make too much sense to doubt at this moment.

So what do you think? Error, coincidence, or a future announcement?