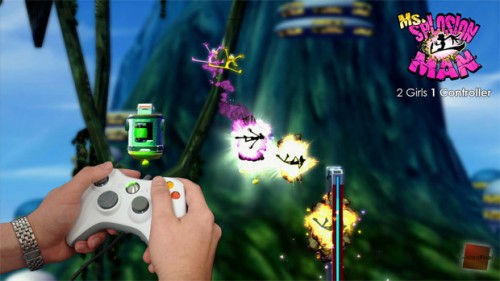 Twisted Pixel has been throwing around the term 2G1C recently, much to the dismay of those who understand what that little phrase means. If you don’t then you really shouldn’t look it up and I refuse to say what it is on here. But Ms. Splosion Man will apparently have the feature called 2 Girls 1 Controller which is much more sanitary than the alternative.

This feature will allow one player to control two Ms. Splosion Mans around the world or even allow two people to play on one controller as each character is moved with one analog stick and then uses the bumper to jump/’splode. They have released a video showing the gameplay mechanic in use and now we can all go back to not being concerned about that whole 2G1C thing.