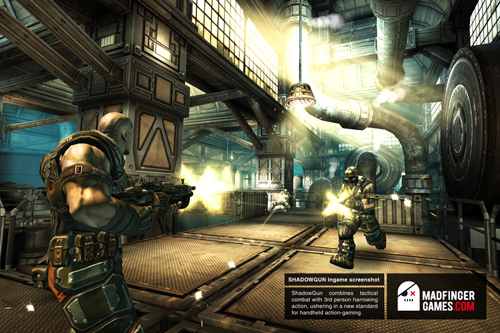 Madfinger Games, creators of Samurai II: Vengeance (available for iOS, Android & Mac), have decided to take things up a notch and announce a brand new property, SHADOWGUN. Designed for mobile and tablet platforms, SHADOWGUN looks far nicer than it has any right to. I mean seriously… that looks like a console game. It’s melting my face with it’s pretty pictures.

By focusing on mobile platforms and tablets, Madfinger has created an extremely advanced handheld game for the market, optimized for performance and delivering a fidelity and quality typically reserved for a console experience.

With SHADOWGUN, Madfinger is hoping to expand the perception of what a mobile game can be. It’ll be available for iOS (iPhone, iPad) and will support Android mobile devices powered by the NVIDIA Tegra super chip, and will be available on the Tegra Zone app and Android Market.

Look for SHADOWGUN, available in an app store near you in 2011.