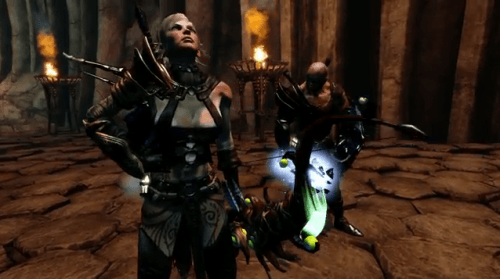 Did you ever wonder how some games get their sound effects to sound so scary or so real to life? Well in some cases they may use some pre-recorded stock sounds but that won’t be the case in Hunted: The Demon’s Forge. Instead that creepy sound you may be hearing could be something as simple as random household items being run together. Or a concoction of different liquid items all mixed into one to make it sound like you are stabbing into flesh.

inXile has spent a lot of time developing the sounds of Hunted: The Demon’s Forge and you can watch the following trailer to find out just how they came up with some of their ideas. Also detailed is the way that the team has implemented puzzles into their game, by making them meld into gameplay without it being to jarring. From the sounds of it some of these puzzles won’t be as easy as some may hope. We’ll be seeing much more of Hunted: The Demon’s Forge next month when it is released on the PC, Xbox 360 and PlayStation 3.