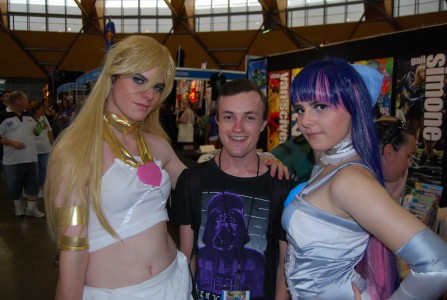 Hey everyone, to celebrate my time at Capsule Computers, I have decided to let the community have a chance at getting to know me a little more closely.

Today and any other day after this article has been published, you can head over to the forums (linked below) to launch me a question and assuming that the question is one that I would deem reasonable, then I will do my best to answer it. These questions don’t just have to be personal though, they can be my opinions on things and what-not. I’ll leave you all with the quotation from my staff page and hope to hear from you all soon.

I’m Linkage Ayexe, LinkageAX, Ayexe, or in reality – Benjamin. I have been gaming since as early as I can remember, but it’s probably longer than that. My earliest memories of gaming are watching my dad play through Sonic the Hedgehog 2 on the SEGA Megadrive (Genesis to everyone overseas). This is also probably the first ever game I played.At the moment I’m a serious QuakeLive player, but not so serious that I attend tournaments and things… I will when I think that I’m good enough though

Outside of Quake I play World of Warcraft, I’m ‘Ayexe’ on the ‘Caelestrasz’ server, hit me up sometime. As you can probably tell, I’m primarily a PC gamer but I do also play consoles and handhelds. My favorite console franchise is the ‘Legend of Zelda’ series, which is (as we all know) the greatest franchise to have ever graced gaming. My favorite TLoZ game would be Ocarina of Time simply because of it’s excellent level design, memorable characters and it’s amazing settings. My second favorite franchise is of course ‘Megaman’ for it’s tough as nails platforming gameplay and entertainingly sci-fi storyline. I started with Megaman X on the PC and ended up moving on the Zero games on the GBA, which are to this day my favorite Megaman games. The ZX games are also pretty good, but I have a soft-spot for Zero.

I was an N64 kid as opposed to a Playstation one, so I saw more top rated games over the years. I grew up with games that were always critical successes on this console, Super Mario 64, Goldeneye64, The Legend of Zelda: Ocarina of Time and many other greats, like LylatWars (Star Fox64) and Perfect Dark (which was sooooo good that it got a HD remake on Xboxlive Arcade!

The gaming industry isn’t all fun and games

QuakeLive – Why being Tier 4 in the popular gametypes sucks