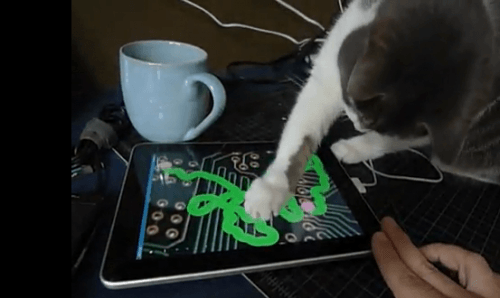 It seems cats have moved even further ahead of humans on the evolutionary scale, and now as well as cleaning their litter boxes and providing them with food and shelter, are overtaking our Ipads. Friskies, the well known cat food manufacturer has launched 3 games specifically for your cat on the Ipad and Android platforms. They were written using HTML5/CSS3 and according to gamesforcats.com (yes they exist) the colours, movements and gameplay have been researched and tested for maximum feline enjoyment. Imagine getting hissed at by the cat as it tries to break billy the tomcat down the roads record on Play Cat fishing, Play tasty treasure hunts and Play party mix-up.

The games are essentially the same concept where the cat has to follow various objects on screen ranging from cat biscuits to swimming fish. The games keep individuals scores and owners (or cats depending on how smart they are); can post them online to ascertain the best reaction times. Also gives kids another weapon when trying to con their parents into buying an Ipad.  It’s for the cat.

Air Penguin out now for Android