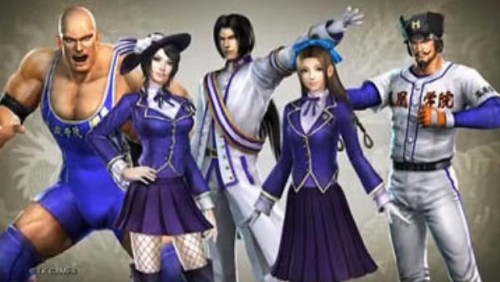 If you like Dynasty Warriors 7 and have some expendable money then you should keep reading because Tecmo Koei just announced a handful of extra Dynasty Warriors 7 DLC. This is set to release on the Xbox Live and PSN on May 24th. Of course that is only if the PSN Store is back online by then. There will be a mix of downloadable weapons, costumes and maps. The costumes you can see above which will be a bunch of school unfirms for fighters of the Wei kingdom. That costume pack will cost $4.99 or 400 MSP.

Also announced was a New Weapon Pack 2 that will cost $1.99 or 160  MSP and will give players a Short Pike and Mace weapon. Costume Pack 2 will only be $0.99 or 80 MSP and will give the Dynasty Warriors 5 costumes to the purchaser. Finally the Stage Page 1 will provide levels from Dynasty Warriors 2, namely the Yellow Turbans and Hulao Gate stages for $3.99 or 320 MSP. The Wei Kingdom school uniforms are obviously the best pick of this DLC package, as fighting hundreds of warriors in school outfits is certainly worth a laugh or two.