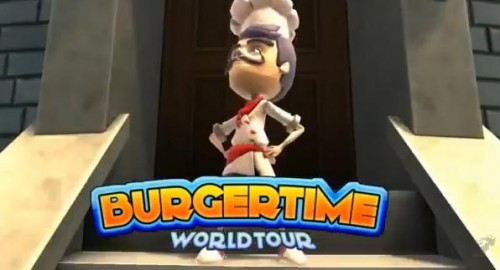 MonkeyPaw Games have been quite busy as of late, preparing for the release of BurgerTime World Tour, previously known as BurgerTime HD which will make it’s way to the XBLA, PSN, and WiiWare later this year. The re-imagining of the age old classic puts Peter Pepper in a circular, 3D world in which players must dodge obstacles and quickly stack up burgers.

In a new “E3 trailer” released today, we get a fantastic glimpse into the game as everything appears to be fast-paced and addicting and you can easily spot several new power-ups with the meaty enemies roaming about. Multi-player is also shown off a bit in which four players can go head to head to gain the crown of top chef. Out of all the gameplay that is shown though, the remixed track used in the clip brings back a lot of good memories from the classic version for myself and thankfully, the original formula looks to run through the veins of World Tour. Hopefully, a release date for BurgerTime World Tour will come forth at this years E3, but for now you can watch the hunger-inducing trailer below.