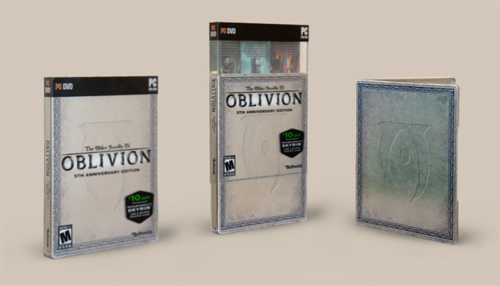 With Skyrim now just under six months away, those who have been trying to find something to occupy themselves until 11-11-11 can now rejoice as Bethesda are celebrating the 5th year birthday of Oblivion (can’t believe it’s been that long) with a bang. Why am I saying this? The Elder Scrolls IV: Oblivion 5th Anniversary Edition is now set to release on June 28th according to several online retailers.

Along with a stunning steelbook (which sells me on the package instantly), this version of the classic will include the Elder Scrolls IV: Oblivion Game Of The Year Edition, a map, making of DVD with Skyrim Trailer, and a $10 OFF voucher for Skyrim. It also seems that the PS3, Xbox 360, and PC will all see this beauty for a nice low price of just $29.99. Now this is looking like a limited release, so I would advise to do some planning ahead but as of now, only Best Buy and Overstock have the 5th Anniversary Edition actually listed for pre-order, which is sure to change eventually. Honestly though, if you are planning on getting Skyrim, this deal is a no-brainer as even without the DVD and fancy goodies, this is still a fantastic deal that should not be passed up. Now wipe the drool off your face and get to pre-ordering!