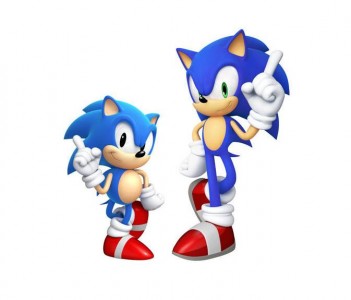 That certainly didn’t take long. Just a couple weeks after officially revealing Sonic Generations, Sega have now launched an official website for the game and released a gameplay trailer. Scheduled out for a “Winter” release in Japan, this new title celebrating Sonic’s 20th Anniversary is still yet to see an official date for the rest of the world, but I imagine Sega of Europe/America should be shedding light on that very soon. Also, it does indeed look that this will be a full-priced disc title due to a listing on GameStop’s official website which lists a placeholder date of 12/31/2011 with a pricepoint of $59.99 (US).

The true star of this story though is the brand new trailer. The clip is over three minutes in length and shows Sonic tearing his way through the Green Hill Zone with the classic famed tunes from the level unchanged. From this trailer alone I can easily say Sonic has never looked this fast and fluent in years and if the whole game plays like what we see hear, we might be looking at the return to glory that Sonic Fans have wished for since Sonic 3. So do yourself a favor and feast your eyes on the new trailer below and once Sega start confirming some more official dates for Sonic Generations, we will be sure to bring you an update.