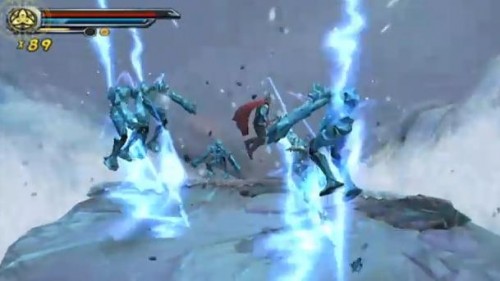 There really has not been too much in the way of any news as of late for the Nintendo Wii as many publishers seem to be concentrating on getting a library built for the 3DS. One title that is getting ready to launch is for the system though is Thor: God of Thunder, based off the movie of the same title coming to theaters later this year. The Wii version is being developed by Red Fly Studio, who brought us Star Wars: The Force Unleashed 2 as well as the small favorite, Mushroom Men: The Spore Wars.

Today Sega, who are publishing Thor: God of Thunder released a brand new trailer for the game and quite honestly, this one looks to have a lot of promise and looks to be a fast paced action game with a bit of similarities to both Mushroom Men and The Force Unleashed gameplay wise. Even though it is based on a movie, the quality that went not only the graphics but the actual gameplay seem top-notch for the system and hopefully this title will get Sega out of their movie-game slump they have been in since Iron Man 2 was released last year. The clip also shows that the Wii version will have exclusive levels for the system. Check out the trailer below and let us know what you think in the comments section.