John Woo’s latest action film, Reign of Assassin’s, will be available on DVD and Blu-ray from Madman on the 22nd of June, 2011. 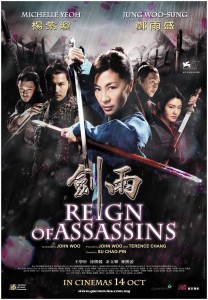 Our favourite Hong Kong actress, Michelle Yeoh (yes, the awesome woman from Crouching Tiger, Hidden Dragon), returns in a ‘swords and sandals’ adventure which sees plenty of swordplay, fighting, and assassinations. Yeoh’s character, “Drizzle”, was a prominent member of a deadly gang, the Dark Stone Gang, but chose to leave her life of theft and murder and begin anew. Choosing the name Jing, she becomes a shop-keeper. However, the Dark Stone Gang is searching for her as she alone holds the secret that could allow the gang to control the entire world.