As many Portal fans are probably aware (or at least those who plan to get it on Steam) there has been an intricate alternate reality game going on related in some way to the release of both Portal 2 and Valve’s Potato Sack bundle of indie games. At the beginning of the weekend, the ARG finally concluded and it was revealed that if fans bought and played enough of the indie games included in the pack, then Portal 2 would release earlier than its scheduled Tuesday morning release date. A website called GLaDOS@Home began tracking the community’s progress towards unlocking the release of Portal 2, which required computational processing power to be gathered for the game’s HAL-like villain. Here is what that site looked like as of 8:00AM EST on Monday Morning. 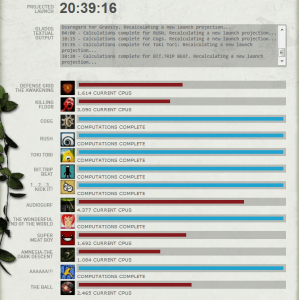 As you can see, the game is predicted to release in almost 21 hours. This would place the Steam release at almost 5:00AM EST on Tuesday Morning, only 4 hours earlier than its intended ~9AM release. While progress towards completing Glados@Home was speedily moving forward for the first 2 days, with help from heavy community coordination including Steam groups, Reddit conversations, and even a wiki, by Sunday night it has slowed to a crawl. Several days worth of playing indie games by the community has failed to produce any significant results towards releasing Portal 2 early, and some fans are upset that they won’t be able to play the game until several hours after the console crowd who will buy it at midnight launches.

Hopes are now being placed on the completion of all of the progress bars at GLaDOS@Home leading to some kind of Half Life announcement, such as the reveal of either Half Life 3 or a release date for Episode 3. However, it seems that Portal 2 will in fact not be releasing early. I can’t say if this move by Valve was genius or ill-conceived. On one hand, they organized an excellent ARG, got tons of people to buy 13 indie games which they probably wouldn’t have otherwise, and sparked some real fan cooperation towards a goal. On the other hand, that goal seems to have been unattainable and I’m sure this will leave a slightly bitter taste in the mouths of more than a few fans.

Opinions are varied, and some still defend Valve, saying that supporting indie developers is important or that a few hours earlier is better than nothing. The slightly earlier release will especially be more beneficial towards those outside of the United States, where the game will launch some time earlier in the day  rather than during the evening. Many American players however feel that Valve screwed the pooch with the ending to this whole event. Ultimately, there is still some time to go on the countdown clock so I guess we’ll see whether Valve can find a way to make everyone happy (although this is the Internet, so you can never please everyone).

Steam Summer Sale kicks off with a number of great deals