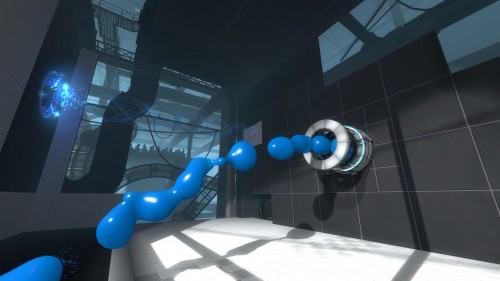 One of the more interesting additions to Portal 2’s already impressive puzzle variety is the inclusion of the different gel that has been placed in the game. These gels, depending on which one you use, can help make the area it is sitting on either super slippery, super bouncy or even allow you to place a portal on a surface you otherwise couldn’t before. However there could have been more gel in the game, but Valve thought it may have caused some problems.

EA themselves has interviewed Valve’s lead writer Erik Wolpaw and in this interview he revealed that a fourth gel was going to be placed in the game that would have allowed players to walk up and down the side of walls. Now the reason that this wasn’t put in Wolfpaw says was because during the playtesting the testers found that the gel caused some problems. “While this added a new twist to the game, the effect was so disorientating that it made people nauseas.” was what caused the gel to be cut from the game.

Also done in an effort to help players with motion sickness the team “made changes to frame rate and movement that will help anyone play Portal 2 even if they do experience a feeling of nauseas while playing other first-person games.” Playing through Portal 2 can sometimes be a stomach churning experience but at least it isn’t quite as bad thanks to these changes they made.

The Splatters come to the XBLA on April 11th