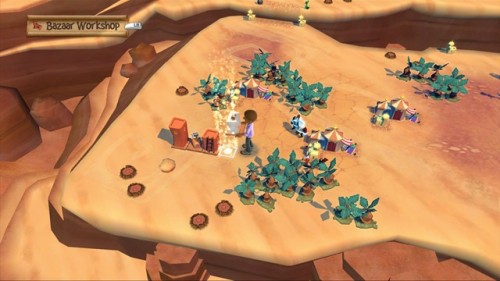 A World of Keflings is fun, but what would make it better is if the keflings participated in raw combat, to the death!

NinjaBee has released a new update that does just this alongside a press release explaining how to activate the update.

It’s been along time coming for the happy-go-lucky Keflings. Today, it’s payback time. NinjaBee announced that it released a patch today that unlocks the long-missing combat in A World of Keflings, turning your avatar’s peaceful tiny helpers into raging ‘Deathlings.’

All players have to do to activate the new feature is log into A World of Keflings and perform an in-game emote.

“Really, who wants to play an RTS where there’s no combat?” said Brent Fox, Art Director at NinjaBee. “That would just be stupid. Not a lot of people know this, but making Keflings the easy-going game it is now was just a big mistake. We meant the original game to be like Age of Empires, Warcraft or Starcraft, but somebody messed up and forgot to build in the combat. I blame our QA department.”

Core gamers eat your heart out.

So if you want to try it out, go buy the game; it is on sale this week if you didn’t already know.

On a more serious note, unless I completely fail at getting it working; it is an April fools joke. It did succeed in getting me to pick up the game again just to try it out however. I did an emote, and nothing; the Keflings just kept going about their days with their peaceful little attitude. I then proceeded to kick them around in rage, and put about 20 of them in my loop of cannons. It is the only violent thing I can possibly do to those little guys. On a more positive note, the cannon stunt did unlock the achievement for me finally. On an ironic note, the game actually did have an update when I turned it on; however, this could just be because I haven’t played it in a while.